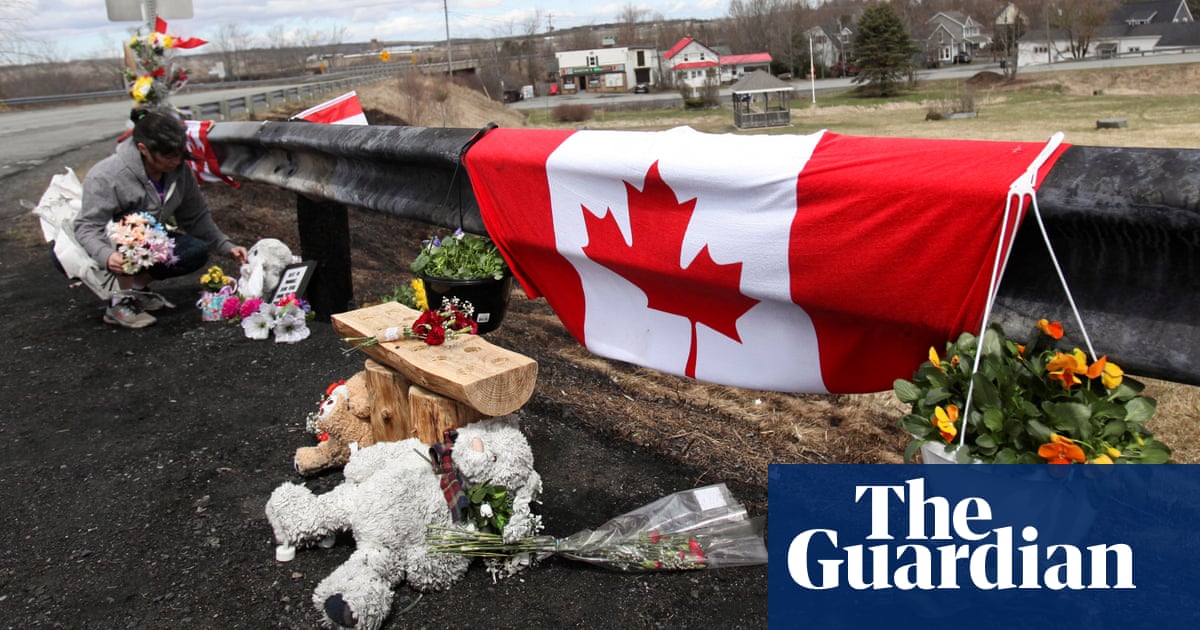 Emergency crews rushing to respond after reports of gunfire in a quiet Nova Scotia town were taken aback when they encountered thick clouds of smoke at the scene.

Is there also a structure fire out this way? one first responder asked his dispatcher. Were seeing huge flames and smoke.

Soon afterwards, when a number of gunshot victims were found, an emergency worker asked if the gunman had been detained.

No, not for sure, the dispatcher replied. They dont know if theyve caught him.

Audio recordings from the night of 18 April capture the atmosphere of chaos and uncertainty as emergency teams grappled with the Nova Scotia mass shooting.

The confusion partially explains how a dental technician named Gabriel Wortman was able kill at least 22 people, including a police officer, firefighter, nurse and teacher. For more than 12 hours, the gunman evaded police, traveling across the province before he was shot dead outside a gas station.

As Canada reels from the worst mass shooting in its history, new details of the slaughter and its aftermath have emerged raising fresh questions about the shooting and the response of the emergency services.

Among the revelations is the fact that for nearly seven hours, authorities did not realize the murderer was disguised as a police officer and driving a replica police cruiser.

Clinton Ellison and his brother, Corrie, were staying at their fathers home in Portapique when they heard a single gunshot on Saturday evening.

Heading outside to investigate, the brothers spotted a large fire up the road. Corrie walked ahead, but he soon called his brother and told him to contact the fire department.

When Corrie failed to return home, Clinton followed his path towards the smoke and found his brothers body in the road.

I shut my flashlight off, I turned around and I ran for my life in the dark, Clinton told CBC News. Sprinting as fast as possible, Ellison turned up the driveway of a cottage.

I turned around and looked towards the road I had just run from to see a little flashlight flashing around, looking for me, he said.

Realizing the gunman was searching for him, Ellison ran blindly into the woods.

For nearly four hours he hid among the trees praying for help amid bursts of gunfire and explosions from the fires before officers led him to safety.

To walk up and find my brother dead, and to be hunted by this fella that killed all these people, Ill be traumatized for the rest of my life, he said.

Police have not yet identified the first victims who were found around a Portapique home, nor have they given a description of the events that led to the first emergency calls.

The head of the Royal Canadian Mounted Police, Brenda Lucki, has said that several of the victims were known to the gunman but that he later simply opened fire at anyone in his path.

According to the Globe and Mail, detectives found a kill list at Wortmans house on Saturday night, with the names of potential victims.

Late on Saturday night, an officer in tactical equipment arrived at Nathan Staples house, warning the Glenholme resident that his name was one of them.

The investigator said I was seventh or eighth on the list. I didnt know what to think, Staples told the Globe. He came to apologize. He said: Were sorry we couldnt have been there quicker. Thats when I got angry.

By dawn on Sunday, police had developed a clearer picture of their suspect, but confusion and uncertainty remained.