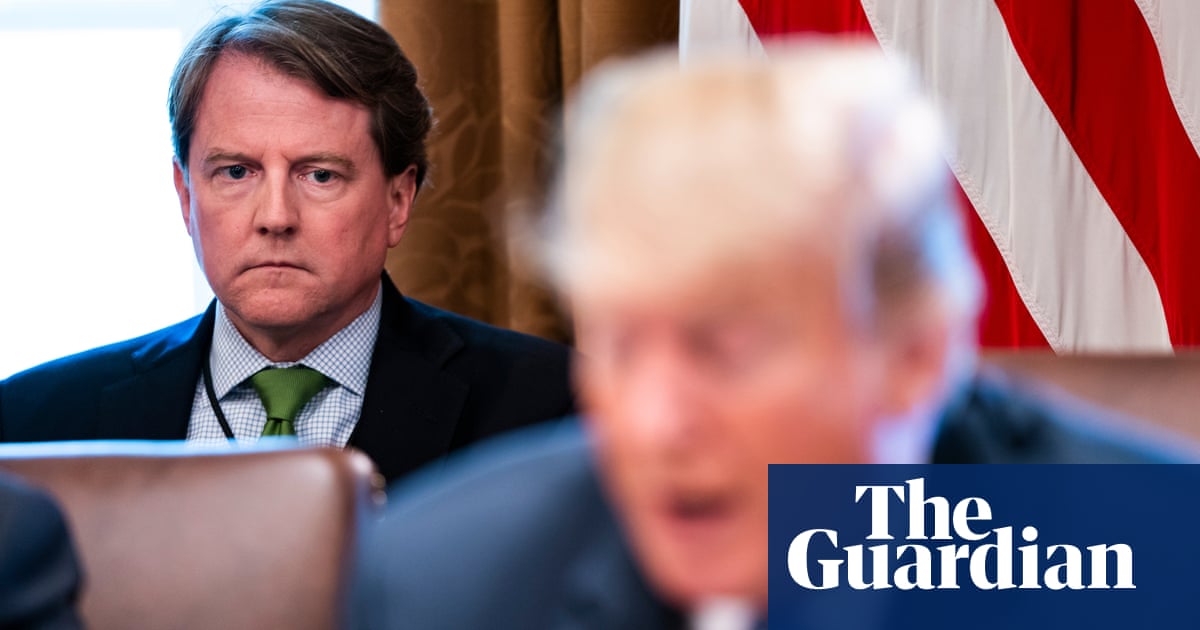 Donald Trump went on the offensive on Sunday, invoking the spectres of Richard Nixon and Joseph McCarthy, starkly polarising figures from American history, in a frenzied attack on the New York Times.

The presidents rage was stoked by a bombshell report that said White House counsel Don McGahn has cooperated extensively with special counsel Robert Mueller in his investigation of Russian election interference, links between Trump aides and Moscow, and potential obstruction of justice.

The president both called the Times report fake and confirmed its substance.

Repeating a spelling mistake made in his initial response on Saturday, when the report was published online, Trump wrote: The failing [New York Times] wrote a Fake piece today implying that because White House Councel [sic] Don McGahn was giving hours of testimony to the Special Councel [sic], he must be a John Dean type RAT.

Dean was White House counsel to Nixon during Watergate. He testified against the president, pled guilty to obstruction of justice and was held at an army base. He spoke on Saturday to Slate.

The Times said McGahn had spoken to Muellers team for a total of 30 hours, on the advice of Trumps first lawyers in the Russia investigation. McGahn shared some information investigators would not otherwise have known, the Times said, about events including Trumps attempts to fire Mueller.

In a separate report, Reuters said a person familiar with the matter did not believe McGahn provided incriminating information about the president and had not seen or heard anything that amounted to obstruction of justice by Trump.

Nonetheless, Trump said on Sunday that the Times wrote a story that made it seem like the White House Councel [sic] had TURNED on the President, when in fact it is just the opposite & the two Fake reporters knew this. This is why the Fake News Media has become the Enemy of the People. So bad for America!

Dean tweeted a reply, saying he had trouble using the title Mr President for someone installed by Putin. He doubted Trump had ANY IDEA what McGahn has told Mueller and added: Also, Nixon knew I was meeting with prosecutors, b/c I told him. However, he didnt think I would tell them the truth!

Trump has used the enemy of the people tag repeatedly, attacks decried by the media for potentially encouraging violence. Last month, Times publisher AG Sulzberger said he had asked the president to stop.

It didnt work. On Sunday the president also claimed, without evidence, that some members of the media are very Angry at the Fake Story in the New York Times and had actually called to complain and apologize. He also complained about a disgusting new Board Member at the Times, apparently a reference to the writer Sarah Jeong.

Dean was not impressed by Trumps behaviour.

I see a lot of similarity in the bungling, he told Slate. Watergate was not a carefully planned crime and cover-up. It was one bungled event after another. I see the same thing happening with Trump.

In his Twitter rant, Trump went 20 years back in time from Watergate, to the red scare of the 1950s. Study the late Joseph McCarthy, the president wrote of the Wisconsin senator who led efforts to criminalise un-American political beliefs, because we are now in period with Mueller and his gang that make Joseph McCarthy look like a baby!

The president has an acquaintance in common with McCarthy: the rightwing lawyer Roy Cohn, who worked for the senator before mentoring Trump as he rose to prominence in New York.