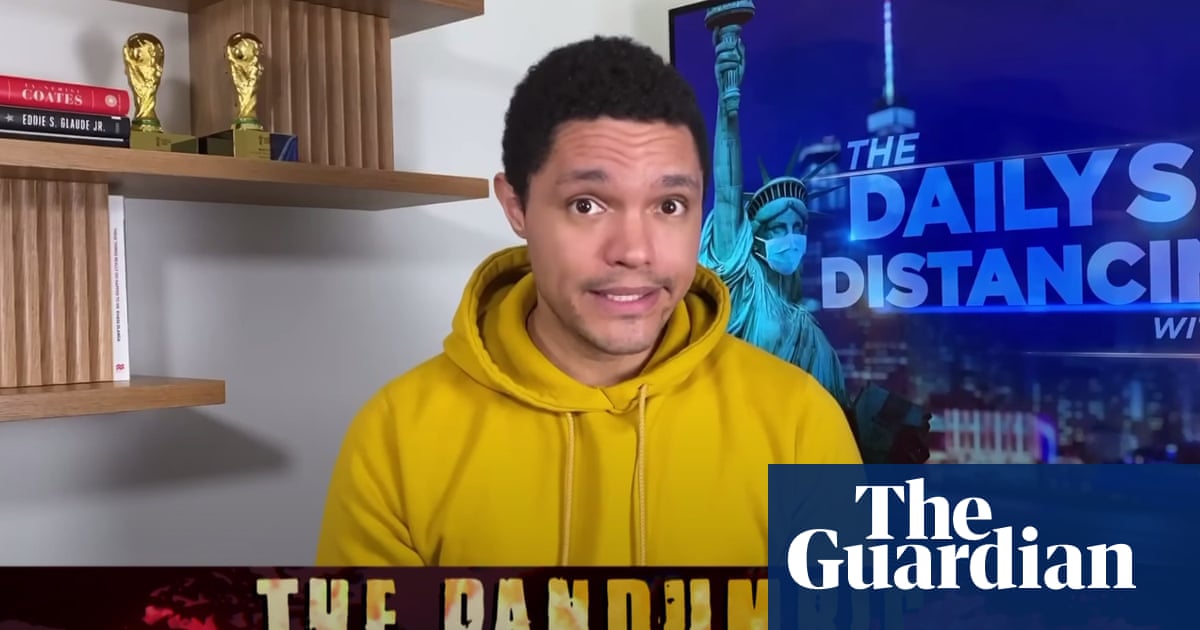 From the beginning of this crisis, Donald Trump has been saying a lot of not-smart things, said Trevor Noah on Mondays episode of the Daily Show, such as that coronavirus would magically disappear with spring weather, or that hydroxychloroquine could be used to treat it. But a few days ago, as youve probably heard by now, President Trump created shock waves of stupidity with his latest and probably greatest unlicensed medical opinion yet.

That would be Trumps headline-dominating, beyond-the-pale suggestion at a press conference last Thursday that Americans should try blasting themselves with UV rays or injecting disinfectants, such as bleach, to treat the virus. This is maybe the first time in documented history that weve seen someone not thinking out loud, said Noah. Injecting disinfectants into your body? This is the problem when the dumbest person in the room thinks theyre the smartest person.

I almost dont even blame Trump, because theres no way he even understands what bleach is, Noah continued. Like, do you think Donald Trump has ever cleaned anything in his life? Do you think he has ever actually used disinfectant? Cleaning supplies might as well be magical potions to him. Noah broke out his Trump impression: I dropped a hamburger on the carpet, then some Mexican lady came in with some Clorox, sprayed it on the carpet, said some spell in Spanish, and then it was gone.

If youre some random guy on the internet with 12 followers, you can say shit like this and it really doesnt matter, Noah explained. But Donald Trump is not just some random guy. And in what Noah is now calling the pandumbic, Trumps comments have had significant fallout, such as upticks in calls to state poison control hotlines, and the release of what were once unnecessary warnings from cleaning supply companies to not eat bleach.

Yep, this is where we are now: authorities have to respond to the presidents ideas the same way they do to viral TikTok challenges, said Noah. Although he did love that people still called their health departments to ask whether they should consume bleach, because it means that even the people who are dumb enough to drink bleach are still smart enough not to trust something that Donald Trump said.

On the Late Show, Stephen Colbert also addressed Trumps endorsement of consuming bleach, since its not enough that his supporters are all white on the outside.

Now, obviously, no one should do that, Colbert continued. So this weekend, people did that. Multiple states experienced an uptick in poison control calls, forcing the president to claim that his comments were merely sarcastic. Oh yeah, Trump is famous for his sarcastic comments, Colbert deadpanned, then played a clip of Trumps oath of office. Hilarious!

Trump also lashed out at reporters on Twitter, decrying journalists and demanding they hand back their Noble prizes. When the internet pointed out that actually, there are no Nobel prizes for journalism, Trump again invoked sarcasm as an excuse. Does sarcasm ever work? he tweeted. Oh, sarcasm works great, Colbert said. Sarcasm is absolutely the best thing for a president to do in the middle of a pandemic. Youre doing amazing Mr President.

Ive gotta be honest, when we went on hiatus a week ago, I did not expect that when I came back Id be talking about the president suggesting using disinfectants and powerful lights to cure coronavirus, said Seth Meyers on Late Night. But then again, thats on me. I should have expected it. We should all know by now: Trump will be more outlandish with each passing week because thats his nature.

Still, Meyers was baffled You have two renowned scientists working with you. Why are you pitching ideas like a sixth-century druid? The comments track, though, as Trumps ideas for solutions are things that have always been there and require no work or effort from him. Hes like a kid who forgot it was show-and-tell and points out the sun, Meyers said.

Unfortunately, Meyers concluded, we just need to be prepared. This is going to keep happening, since Trump is a powerful, dumb guy and he is friends with other powerful, dumb guys and they like to call each other up and pitch their dumb ideas to each other. The whole thing is like a lifelong episode of Shark Tank where no one has a good idea and everyone wins.

And in Los Angeles, Jimmy Kimmel at least found one potential silver lining in Trumps false dismissal of his dangerous bleach endorsement as sarcasm: Can we claim we were being sarcastic when we elected him president?

Though, after Trumps press conference last week, the Environmental Protection Agency issued guidelines for disinfectants with the line: Do not ingest disinfectant products. Unfortunately, many of those who support Trump are perfectly happy to ingest disinfectant products if the president tells them to do it, said Kimmel. Even the makers of Lysol had to issue a warning. I think this might be the first president ever to embarrass a cleaning product, Kimmel said.

Usually, when a human being says something that is dangerous and dumb and gets a ton of backlash for it, they either apologize or at the very least, reel it in, Kimmel concluded. But if youre Donald Trump, you just dont do that. You just keep talking and talking and you try to bury it all under a mountain of nonsense.