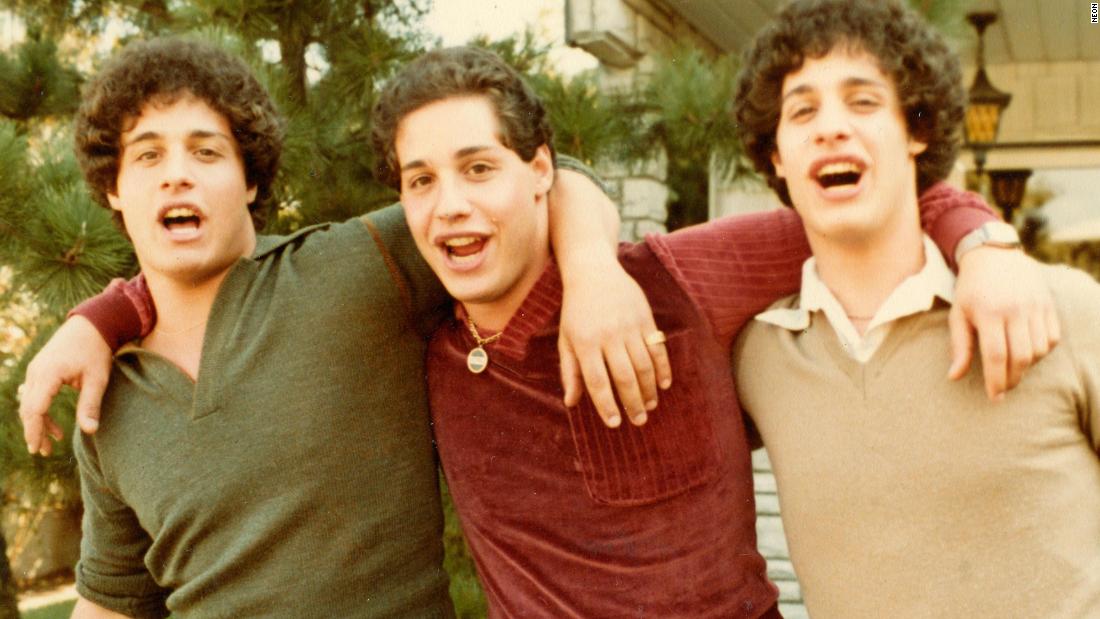 (CNN)“Three Identical Strangers” is an astonishing documentary, a look at how a feel-good, made-for-TV “separated at birth” story took on an unexpected, more sinister tone.

For those who don’t remember the story, the tale began in 1980, when a pair of 19-year-old college students, both adopted, were understandably shocked when they were mistaken for each other on campus. A third triplet saw the two in the newspaper, and their fame mushroomed, as dutifully documented by clips of the trio appearing together on morning programs and “Donahue.”
At first, it was too good to resist — guys separated at birth, who shared all sorts of traits and habits. The story created the 1980s version of a media feeding frenzy, which — given the less-populated waters of the time — offers its own delicious sub-thread.
The three, moreover, instantly started hanging out together, parlaying their new-found celebrity into the sort of fast-paced, club-going lifestyle that New York could offer at the time.
Soon enough, though, questions began surfacing about how and why the three — Eddy, David and Bobby — were separated. And the answers to that prove unsettling, taking the story in wholly unforeseen directions.
In the process, what began as a novelty act veers into the realm of tragedy. Wardle has left no stone unturned in chronicling this story, and even with the voluminous video record that’s unearthed — and extensive interviews with the brothers, adoptive parents, spouses and others — some maddening gaps remain regarding what happened, and why.
Saying too much, frankly, risks spoiling the sharp turns that the narrative takes, but the result is sobering — inviting contemplation about the very nature of what makes us who we are, as well as the horrifying notion that people might have exploited children, with no say in the matter.
Everyone is in the market now for sensational fact-based stories, but it’s rare to run across one as enforced, with as many layers, as this one. In terms of a tale where the truth is not only stranger but more compelling than most fiction, “Three Identical Strangers” hits the jackpot.
“Three Identical Strangers” will open June 29 in the US.
UPDATE: This article has been updated to add that “Three Identical Strangers” is a CNN Films project.