The annual carnival in Indianapolis is supposed to showcase players talents. But the event instead swings between pointless and demeaning 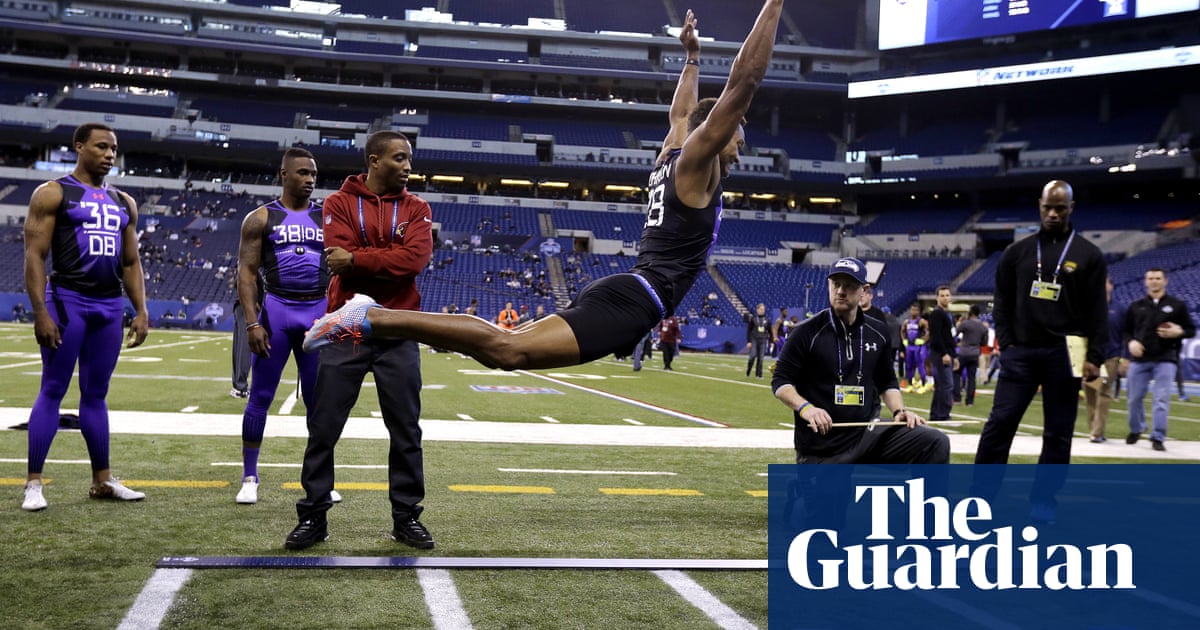 The underwear Olympics, otherwise known as the NFL combine, will roll into Indianapolis next week. College stars will jump, run and lift weights in front of NFL scouts and it will mean almost nothing.

In an era in which every major college football game is aired on TV, scouting departments have swelled, analytics have become a bigger part of the evaluation equation, and players are tracked, measured and weighed from high school on up, you could be forgiven for wondering why the teams and prospects subject themselves to this annual sideshow.

The league office is still all-in on the event, working with its broadcast partners to move the once untelevised event into a primetime slot. NFL Network will beam wall-to-wall coverage of every bench press, 40-yard dash and shuttle run. Want to watch a very fast man run slightly slower than another very fast man? Tune in at 3pm sharp with network heavyweight Rich Eisen.

When the combine was first introduced, it was a way for teams to meet prospects, get accurate height and weight measurements and, often, to see players perform football drills for the very first time. Especially during a period when college footage was often grainy and awful.

Those days are gone. NFL franchises are multibillion dollar operations. Every decision requires extensive analysis. The players, in teams eyes, are assets. They hire private investigation firms to run extensive background checks on potential picks these days. And spotting an a scout on a college campus has become just as standard as seeing a professor the lines between college football as a standalone competition and as the NFLs minor league have never been so blurred.

The combine is a chance for a team to grab a bunch of extra data points in quick fashion, they say. To gather the easy things height, weight, speed and the intangible stuff: the psychological evaluations, medical records, and football intelligence. Its a giant exercise in ass-covering junk science, in collecting reams of information that have little to no relevance in predicting football performance.

Something feels murky about the whole enterprise. The combine is an invitation-only event, hosted by the league to let the players know their place in the hierarchy before theyve even earned a paycheck. The undertone of the whole thing: be grateful youre here, young man.

It is worth noting here, though it has been covered in more depth by more qualified people, the racial overtones of the event: a largely white NFL staff evaluating a mostly African American player pool.

Never is that contrast more apparent than during weigh-in night. Players in their underwear are paraded on stage in front of a room full of executives, scouts, and coaches, like some kind of pre-fight marketing venture. Agents take pride pride in preparing their clients for that first moment when they enter the Indianapolis ballroom. When scouts shuffle in their seats and audibly gasp. He didnt look like the last time I was on campus. It is demeaning to everyone involved.

The combine is supposed to be about information gathering. Teams pay much less attention to the drills than the talking heads would often have you believe. Its why the Denver Broncos and Los Angeles Rams have told their assistant coaches to stay at home this year. Watching film of the prospects and having the staff spend more time with their families is seen as a more productive use of resources than jetting them all to Indy to shake hands and watch drills.

Theres an added component to that, though: preventing leaks.

Indianapolis is where team executives finally let their hair down. For a week, the city effectively becomes a company retreat. People gossip. A lot. They fish for information, they share information. The Super Bowl is the NFLs glamour week, but its at the combine where offseason business really happens: trades are initiated, executives and agents start to discuss free-agent options.

There are more insidious incidents that leak, too. Year after year were treated to stories of combine interviews gone wrong. The questions players are asked range from the bizarre to the offensive. Just some of the gems exposed in recent years: Do you like men? Would you share your internet history with us? Whats your murder weapon of choice? Is your mother a prostitute?

You wince just reading them its the power imbalance that makes them so disturbing. Teams know full well they stand between a prospect and his dream, and an amount of money that could change the fortunes of his family for generations.

To the league office, meanwhile, the combine is about extending TV coverage right through to the draft at the end of April. The combine, to them, is like the early episodes of The Bachelor: get to know all the contestants a little bit better before we hand out our roses in a couple of months. Its supposed to make the public more engaged with the process.

But its a process that, in its current form, has become outdated. The TV ratings were a disappointment to the NFL last year. Typically, everything they touches booms, and nothing sells quite like hope. But the 2019 episode was bested twice, head-to-head, by college basketball and gymnastics.

The event needs reformatting if not kicking to the curb. It feels outdated and unnecessary. Along the spectrum from meat market to data collection, it has veered far too close to the former. If the teams are happy to stop sending coaches and the viewing figures arent soaring, what is the point?