It’s a common pitfall—you go to a restaurant, trying to be healthy, and think, “Well, I’ll just order a salad. How many calories could possibly be in a salad?” Surprise, b*tch. There could possibly be a lot of calories and fat in your bowl of leaves. So I’ve done the research and subsequent life reevaluation to tell you which are the worst salads you could order, and which are actually doing their job as a salad.

Before I get into this list of the worst salads, I would like to say that it was actually very difficult researching this topic because there are so many ways to make them and there’s not exactly a governing body ensuring every salad meets a certain set of standards. But I did the best I could. And that’s going to have to be good enough.

Okay, if you’re honestly ordering taco salads out at restaurants, I’m going to need you to take your time machine back to 2007. You can’t really be surprised that taco salads are unhealthy, seeing as they basically combine all the least healthy elements of a taco—fried shell, sour cream, shredded cheese, beef or your meat of choice—and mix them together into one calorie bomb. Livestrong puts a typical fast food taco salad at 960 calories and 49 grams of fat. Say it with me now: yikes. But if you get it without the fried taco shell and sour cream, it could be as low as 300 calories and 13 grams of fat. Save the shell, save your arteries.

A traditional Cobb salad, with the dressing, is about 623 calories and upwards of 43 grams of fat. Pour one out for your arteries if you eat this one on the regular. But, like the taco salad, this shouldn’t really come as a surprise. Your friendly neighborhood Cobb salad contains bacon, ranch dressing, and blue cheese, among other things. Really, the only ingredients of nutritional value here are the turkey/chicken breast (if it’s on there) and the hard-boiled egg. And I guess the lettuce—unless you’re sticking with traditional iceberg, which is essentially just crunchy water with like, no vitamins.

Ah, the chef salad. A favorite of my dad who thinks he’s being healthy when he swaps out the ham for extra turkey and the regular dressing for Creamy Italian. Oh, Ira. So misguided. A typical chef salad has turkey, ham, a hard-boiled egg, cucumbers, cheese, tomato, and carrots. None of those ingredients sound too unhealthy on their own, but when you put it all together, it’s a little too much. According to MyFitnessPal, one of these has 480 calories, 22 grams of fat, and 680 milligrams of sodium—without the dressing even factored in. For reference, if you’re on a 2,000 calorie diet, it’s recommended you eat no more than 44-78 grams of fat per day. So that chef salad is already half your fat for the day. And as for sodium, the American Heart Association recommends you consume 1,500 mg per day. So again, you’re almost at half—before you’ve even put any dressing on this monstrosity. And if you’re my dad and you put Creamy Italian dressing… well, I’ll let you put two and two together. There are healthier options.

In a move that should surprise no one, Caesar salads are about as much a salad as taking a slow walk around the block is a workout. Like, sure, it’s not the worst thing, but definitely not the best. You’re talking a few cups of Romaine lettuce, which offer no real nutritional value plus the risk of E. coli right now, shredded cheese, croutons, and creamy, anchovy-filled dressing. Yea, no wonder this isn’t exactly health food. The Food Network says a traditional Caesar salad has 470 calories, 40 grams of fat, and 1,070 grams of sodium. Woof.  The calories aren’t bad, but that is so much sodium.

The individual ingredients of a niçoise salad—potato, olive oil, eggs, tuna, black olives, green beans, red ripe tomatoes, bib lettuce, cucumber, shallots, cider vinegar, pepper—sound pretty healthy. And yet somehow, when you combine them, you end up with close to 450 calories and 20 grams of fat. Hmm, seems extreme. I didn’t really believe it, so I decided to plug a niçoise salad into my Weight Watchers app. For reference, I’m 5’2″, 118-120 pounds depending on the day, and not looking to lose weight. I am allotted 28 points per day. You know how many points are in a niçoise salad? 4 without dressing. But with dressing? 17. SEVENTEEN. More than half my daily points allowance on some dumb salad with tuna and capers. For me, that’s not super worth it, but I’ve never actually ordered a niçoise salad anyway. 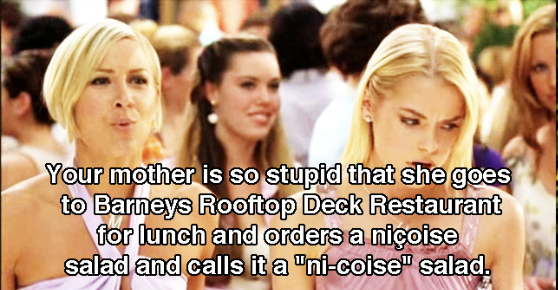 Greek salads are actually my go-to, and not just because I live in a historically Greek area. See, here’s the thing about Greek salads: You think they’ll be a calorie bomb because of the feta cheese, but feta cheese is actually super light. I dare you to grab your food scale and measure out an ounce of feta. I DARE YOU. It’s actually a lot more than you’d think, right? So a Greek salad without the dressing is only about 150 calories and 13g of fat. And two tablespoons of Greek salad dressing will only run you 110-200 calories, according to Livestrong. It’s overall v low-cal, even with the dressing.

When you read the ingredients on a Waldorf salad, everything seems just fine and dandy: apples, celery, walnuts, salt, lemon juice, lettuce… and then it gets hairy. White sugar (wait what? why?) and then—wait for it—mayonnaise. After some research, the mayonnaise is for the dressing. However, if you’re like me and go running at the mention of mayo, you might want to stick around for just a second. A Waldorf salad is only about 243 calories and 20 grams of fat. That’s actually pretty low-cal. Again, never been a big Waldorf salad eater, but maybe I’ll start expanding my horizons.

Okay, this one actually SHOCKED me. I thought, surely, given that a caprese salad is actually more cheese than salad, it would basically kill me. Right? Not so right. A caprese salad has 250 calories per serving and 18g of fat. Slightly less fat than the Waldorf, but slightly more calories. And WAY less than a mf taco salad. Just eat a taco. Don’t eat a taco salad.