Like the Tea Party, the demonstrations are a blend of grassroots and Astroturf activism and they are key to Trumps election hopes 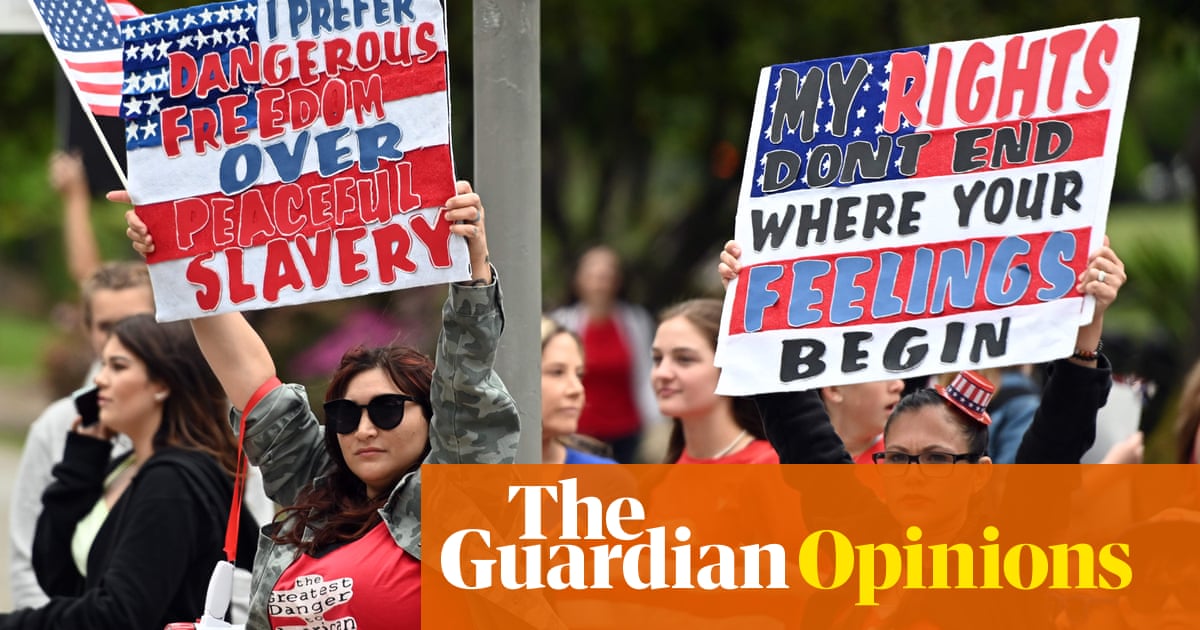 This weekend thousands of rightwing Americans took to the streets in several states to protest against the coronavirus lockdowns, or stay-at-home rules, issued by their governors. Although most of the protests were marginal counting dozens of people at best conservative and liberal media outlets devoted considerable attention to them.

Although officially protesting against the lockdowns economic costs and what they viewed as infringements on their liberty, the protesters were expressing the usual hodgepodge of rightwing grievances. As always, opposition to abortion and immigration and support for President Trump and the second amendment were prominent.

But perhaps my favorite slogan was a surprising one spotted at a rally in Minnesota: Be like Sweden. For years, Sweden has been the poster child of the US far rights feverish dystopias of European socialism Breitbart, in particular, has an unhealthy obsession with the country. To see American rightwingers champion one of the few European countries still governed by a leftwing government is therefore truly astounding.

The anti-lockdown protesters have obvious parallels with the early Tea Party mobilization of 2009, down to their prominent display of the Gadsden flag the yellow flag with the picture of a snake and the text Dont tread on me, a historical American symbol appropriated by the Tea Party.

The Tea Party movement was the most important US political movement of the early 21st century, but it has been almost completely written out of US political history in the wake of Donald Trumps shock electoral victory. Conservatives and liberals have always interpreted the Tea Party through their own ideological lenses: where conservatives saw a spontaneous grassroots movement, liberals saw an Astroturf operation bankrolled and organized by powerful rightwing interests.

A similar split in narratives has emerged over the anti-lockdown protests. Conservative media outlets have emphasized the grassroots aspect of the Lockdown Rebellion, staying quiet about the protests financial and organizational connections. In contrast, liberal media outlets have focused primarily on these ties, notably to the family of Trumps secretary of education, Betsy DeVos, a longtime and generous funder of rightwing political causes.

Just like the Tea Party, the anti-lockdown protests are a combination of Astroturf and grassroots. In the case of the Tea Party, the two were united on socio-economic issues Taxed Enough Already but divided over socio-cultural issues, mostly because the Astroturf branch did not want to weaken the movement amid potential divisions over immigration and religious issues like abortion. While Americans for Prosperity and FreedomWorks, the well-financed rightwing groups that supported the movement, were successful in keeping the supportive rightwing media on socio-economic message, socio-cultural issues often dominated at the grassroots level, with opposition to abortion and immigration as well as thinly veiled racism focused on President Obama (including birtherism, the false idea that Obama was not born in the US).

There is one crucial difference between these two rightwing protests, however: while the Tea Party attacked the White House, the anti-lockdown protesters clearly support it. In fact, Trump and the protesters are cheering each other on publicly. Pro-Trump banners are omnipresent at the protests, and Trump has repeatedly praised the very responsible protesters.

On Friday, when rightwingers were announcing their protests on social media, the president loudly encouraged them in a series of all-caps tweets: LIBERATE MINNESOTA!, LIBERATE MICHIGAN!, LIBERATE VIRGINIA. An interesting selection of states, which shows that there is more at stake than just frustrations over the lockdown.

Almost 95% of Americans are under lockdown at the moment; 42 states have issued stay-at-home orders. This includes many states with Republican governors, however late and reluctantly they came to that decision. But the protests largely target states with Democratic governors. Moreover, the three states singled out by President Trump in his tweets are key targets of his 2020 campaign holding Michigan and flipping Minnesota are crucial for his re-election. He hopes to swing Virginia by mobilizing rightwing voters on gun rights and the lockdown.

For Trump, the anti-lockdown protests provide him with visible popular support for his Covid-19 strategy. For the sake of his re-election, he is keen to move discussion from public health to the economy. Given that a clear majority of Americans support the stay-at-home policies, Trump needs the momentum to shift. The protests can help him, by taking his struggle from the White House to the streets, and thereby to the media.

However as many Republicans found out the hard way, in the Tea Party era – the streets are more difficult to control than lobby organizations and rightwing media.