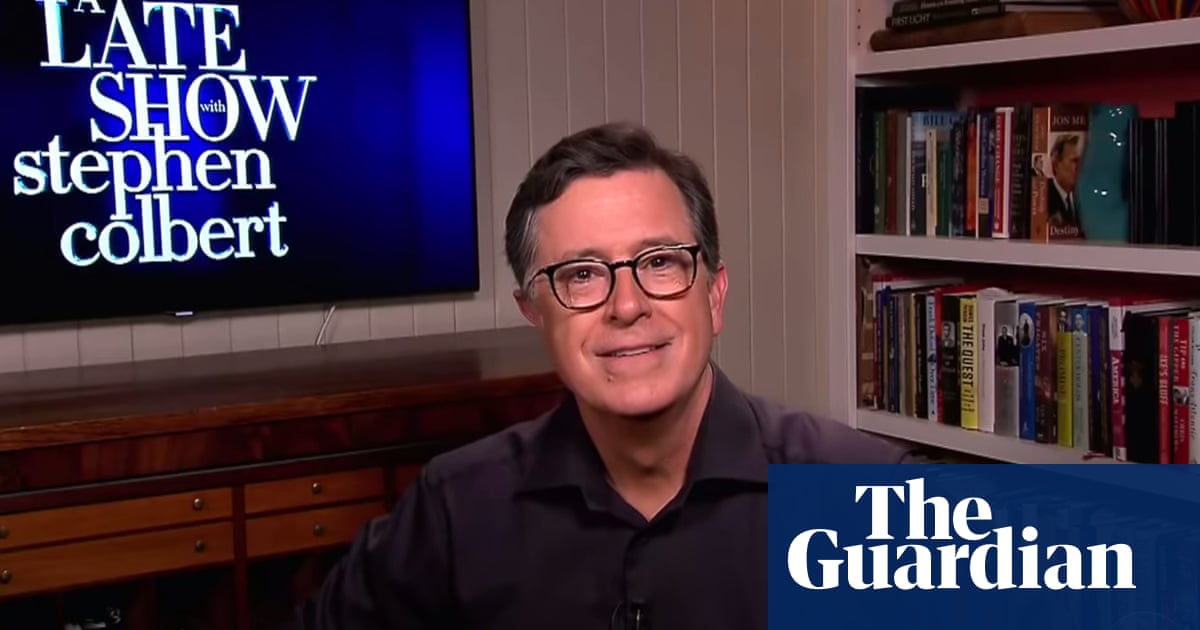 On Tuesdays at-home Late Show, Stephen Colbert reacted to the previous nights late news: at 10pm on Monday, Donald Trump announced via tweet an executive order to temporarily suspend all immigration into the United States. While I dont necessarily agree with it, said Colbert, its probably the safest thing for the immigrants. Because right now America is basically a Petri dish on the floor of a bus station mens room.

The president later claimed the 60-day ban on green cards was meant to protect American workers, but this ban is not going to do anything to stop the spread of the virus or put Americans back to work, Colbert explained. Its just Trump using the virus as an excuse to do what hes always wanted to do anyway. Its like if your house catches fire and you say, Honey, its not safe in there Im going to go buy a set of golf clubs.

Its worth asking, Colbert continued, exactly how xenophobic is he being here? He cited the 1918 flu pandemic, during which the United States allowed more than 110,000 immigrants to enter the country. So, Donald Trump is more xenophobic than Woodrow Wilson.

At this point, were all used to the presidents reliance on Twitter for what should be coordinated executive branch announcements. Still, this shouldnt shock me, but the United States of America has a president who just ordered a sweeping change in our national immigration policy via tweet, said Colbert. That would be like Obama announcing the death of Bin Laden on TikTok.

The tweet, Colbert noted, had absolutely no detail on how this ban would work, which reportedly caught some homeland security officials off-guard and you dont ever want to catch homeland security off-guard, he added. Thats like your doctor holding up your chest X-ray and going, Oh, I did not see that coming.

Theres really only one logic that explains this late-night policy drop: Trumps tweet is less about information and more about promoting todays press briefing, reality show-style, Colbert concluded, then imitated the president: Heres a teaser of my new executive order am I really going to ban all immigrants? Will I throw wine in Steve Mnuchins face and call him a bitch? Gotta tune in to find out.

On the Daily Social Distancing Show, Trevor Noah called Trumps immigration ban via tweet a big step for Trump, because remember, two-thirds of his wives have been immigrants closing the immigration system is Trumps version of deleting Tinder.

The ban obviously has some people alarmed, because he is the president, said Noah. And if Trump does use the virus as an excuse to freeze immigration, it will be yet another policy hes pushing through during the coronavirus pandemic, Noah continued. In fact, his administration has already shut down visa applications, theyve paused the refugee program, theyve blocked migrants from seeking asylum, and during corona, Trumps EPA even decided to drastically cut enforcement of environmental regulations.

Noah concluded by reminding those watching at home: While youre finally getting around to watching Ozark and trying to bake bread for the first time, Donald Trump is also using coronavirus as an opportunity to do all the things he always wanted to do. The only difference is: when quarantine is over, and you throw away your bowl of yeast, Trumps hobbies are going to keep going for a very long time.

And in Los Angeles, Jimmy Kimmel recapped a series of lies told by the president at his press conference on Monday, such as his claim that he knew coronavirus was bad months ago and didnt hold any rallies in February and March (he held several). Trump essentially said, according to Kimmel: Did I hold a rally in an enclosed space even though I now claim to have known it was dangerous at the time? Yes! Do I have an advent calendar, counting down the days until I can hold my next one. You bet your dirty mask I do!

Trump also claimed to be holed up in the White House for months, but he actually made four trips in March, including to his resort in Florida, Mar-a-Lago which incidentally laid off 153 people on Tuesday, in addition to the 560 laid off at Trumps resort in Miami. Maybe this is why hes so anxious to open for business again: hes getting hurt, Kimmel surmised.

This gives you a sense of how things are going at the White House: the presidents own coronavirus taskforce members of his own team are reportedly actively ignoring him now, Kimmel continued. They say the vice-poodle, Mike Pence, wont even sniff his butt. It doesnt make any sense, Kimmel joked: Why would they ignore a president who has so many great ideas? Remember when he wanted to nuke the hurricane? You probably think Im joking, but go ahead and Google that.

Trump campaign seizes on immigration order to ignite his base