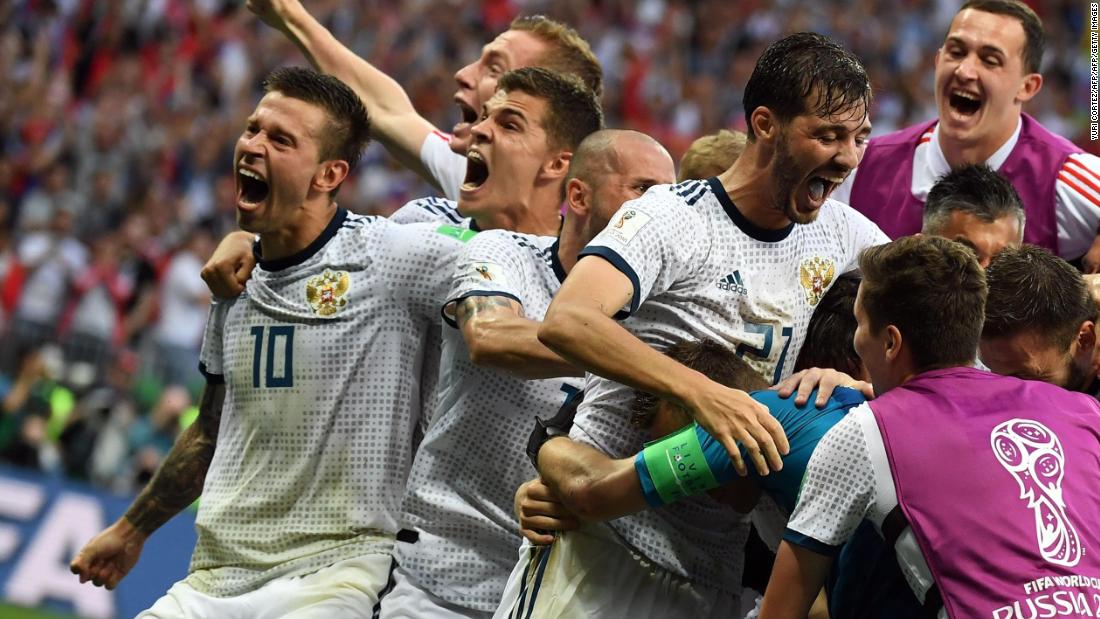 (CNN)Russia sensationally knocked Spain out of the World Cup after coming out on top of a penalty shootout.

Missed penalties from Koke and Iago Aspas ensured Russia progressed to the last eight for the first time in the post-Soviet era, sparking joyous celebrations in Moscow.
Follow @cnnsport
CNN’s Alex Thomas said jubilant Russian fans were still partying outside the Luzhniki Stadium an hour-and-a-half after the game had finished.
“I can’t explain my feelings, it’s so wonderful,” one Russian fan leaving the stadium said.
Russian journalist Robert Ustian told CNN that he saw people crying and hugging each other in the aftermath of the penalty shootout.
“I thought Russia would be in the best case third in the group … when they went out of the group, I thought the mission is completed,” Ustian said. 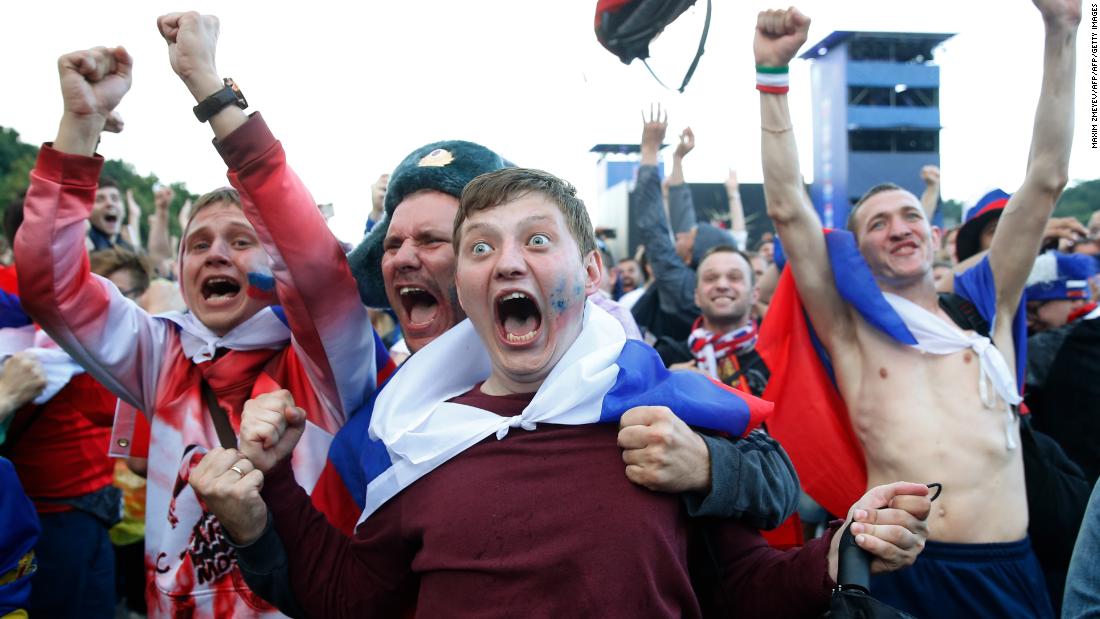 Spain, by comparison, will now have to pick up the pieces from a tournament that was thrown into disarray just days before it began when coach Julen Lopetegui was dismissed after agreeing to become the new manager of Real Madrid.
The Spaniards’ exit also signaled the end for 34-year-old Andres Iniesta who, after the match, confirmed that he was retiring from international football after a glorious career.
“Sometimes the endings are not as one dreams,” said the former Barcelona player, a key member of the Spanish team which won two European championships and a World Cup.
“It is the saddest day of my career,” added Iniesta after his 131st and last appearance for Spain.

For all its possession and territory, the former world champion was far from convincing against a disciplined opponent.
Arten Dzyuba’s penalty before the break negated Sergey Ignashevich’s 12th-minute own goal and from there on in the Russians refused to cave, forcing the match into a penalty shootout after it had ended 1-1 following 120 minutes of play. 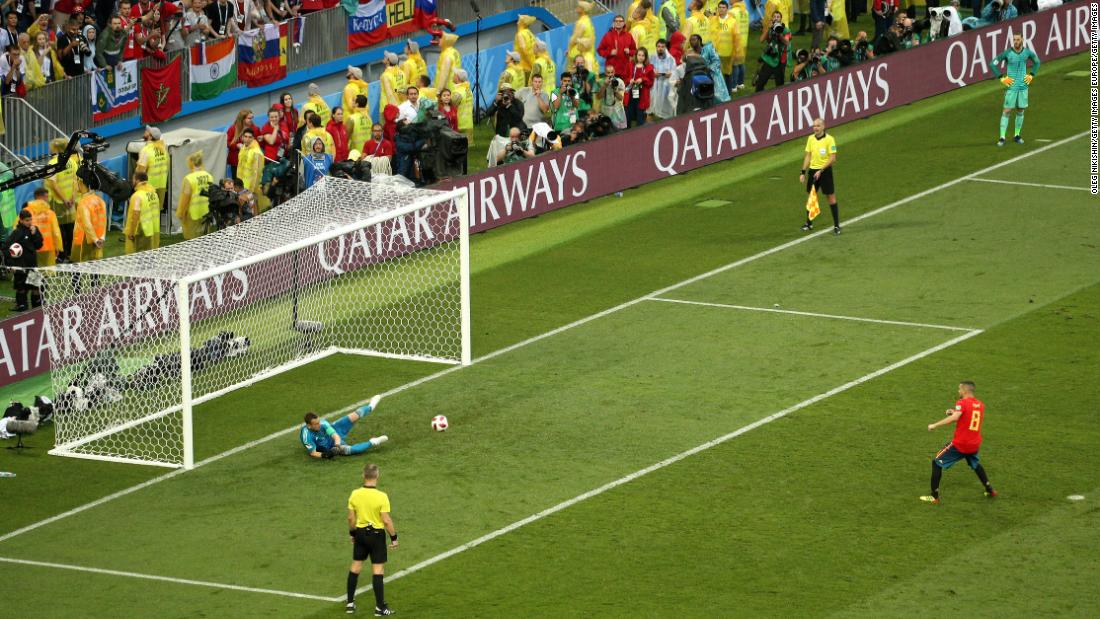 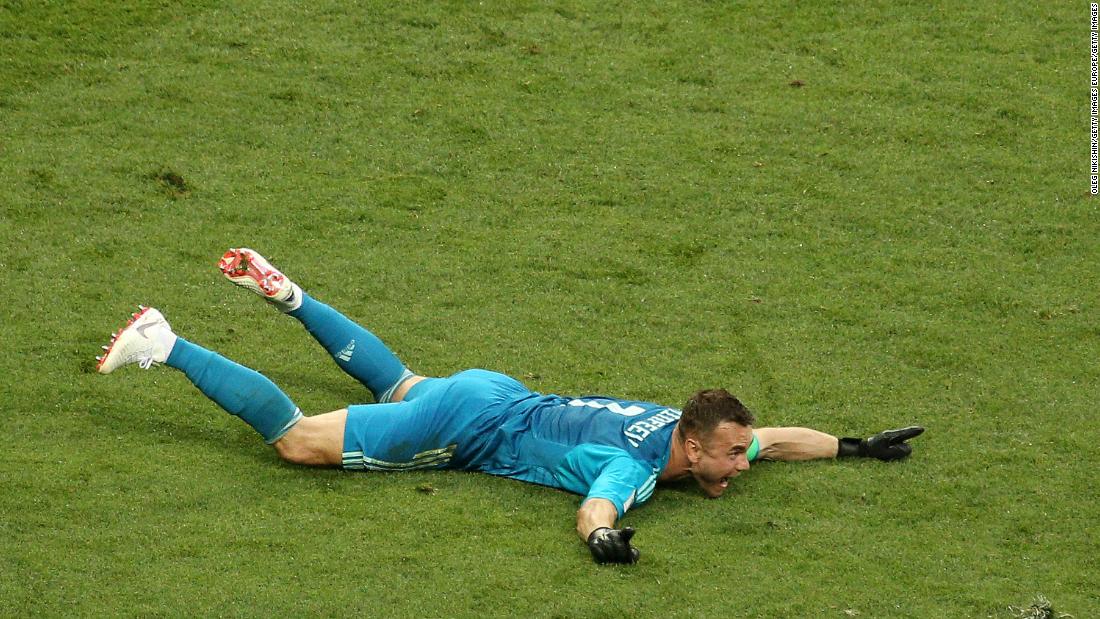 The lowest-ranked team coming into this tournament and considered by some as the worst side in the country’s history, the Russians surprised many by not only reaching the last 16 but doing so comfortably, steamrolling Saudi Arabia and Egypt and scoring eight goals in three games.
Striker Dzyuba had described Sunday’s last-16 encounter as a “match of a lifetime” and spoke of how the players needed to “die on the pitch” to have a chance of overcoming the 2010 World Champions.
Buoyed by a partisan crowed, the home team gave it their all and there were tired Russian bodies aplenty after a stubborn defensive display took the tie to extra time and penalties.
In the end, it was another astonishing result in a competition which has seen Germany, Argentina and also Portugal depart already and increases the likelihood of a first-time winner lifting the trophy.
Russia will face either Croatia or Denmark in the last eight, a match which will be played on July 7.
READ: Mbappe scores twice to knock out Messi’s Argentina
READ: Ronaldo’s World Cup ends as Uruguay beats Portugal

At times, it seemed as if the Russians were going to be killed by a hundred passes as La Rojo displayed a mastery of the ball for which the two-time European champion is renowned. By the end of the match the Spaniards had completed over a 1000 passes.
But despite being blessed with a wealth of talent Spain has also failed to overwhelm opponents in this tournament, drawing with Portugal and Morocco in the group stage.
The Spaniards went ahead in the 12th minute when Ignashevich backheeled the ball into his own net while attempting to rugby tackle Sergio Ramos to the ground as Marco Aesnsio guided a freekick towards the far post.
Falling behind so early seemed to signal the beginning of the end for a Russian team playing five men in defense, but despite being starved of possession the Russians hit back before the break.
Gerard Pique, beaten in the air by Dzyuba, stuck his arm up as the Russian headed towards the goal and the referee needed little time in awarding a penalty for handball.
Dzyuba converted from the spot and it proved to be a costly mistake from the Barcelona defender as the rest of the match turned into defense versus attack with Russia’s defenders, ultimately, coming out on top. 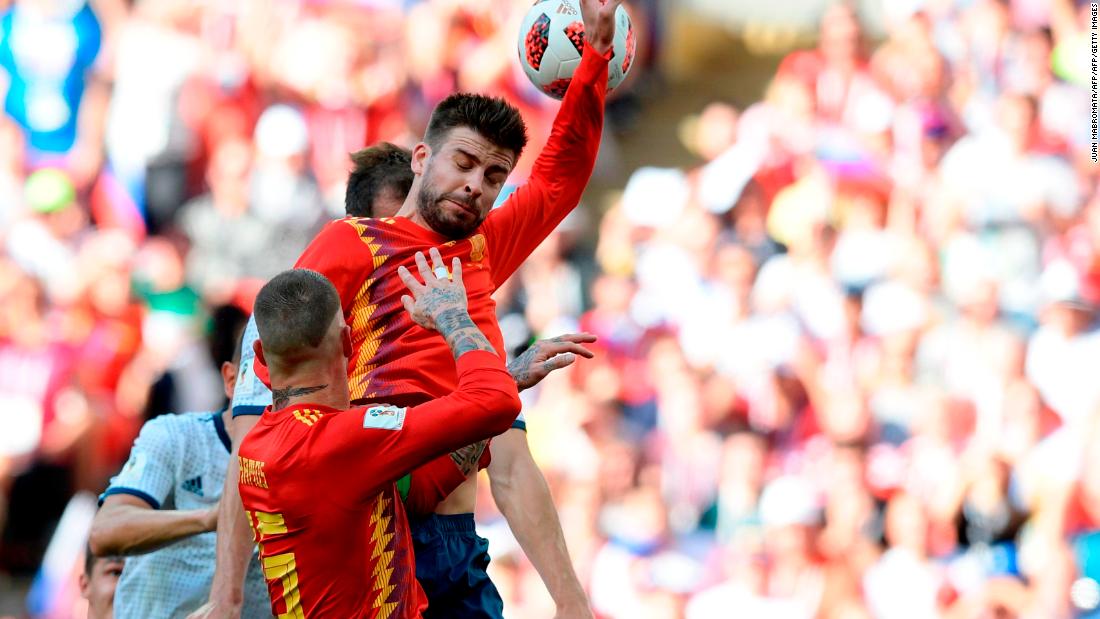 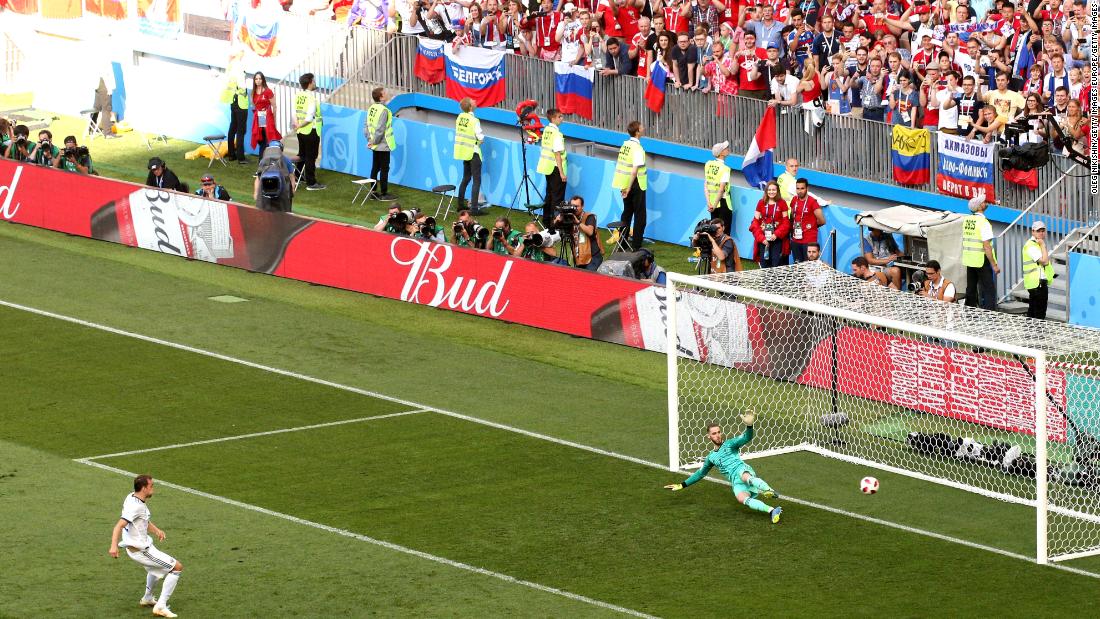 With Spain out, who are your favorites to reach the World Cup final? Have your say on our Facebook page.

The ultimate test of nerve

Despite their supremacy, the Spaniards failed to truly trouble Igor Akinfeev, the man whose two penalty saves will turn him into a hero, for the majority of the match.
The Spaniards introduced Iniesta in the 66th minute, a surprise omission from the starting line-up after a decade of orchestrating play in the Spanish midfield, as they went in search of a goal.
Yet even with Iniesta on the pitch, the Spaniards struggled to conjure a killer pass. The former Barcelona man went close with six minutes remaining, his drilled howitzer forcing Akinfeev into action.
There were a series of corners for Spain in the closing minutes, while the Spaniards ceded possession to give the Russians a whiff in injury time but this contest would not be decided in normal or extra time. 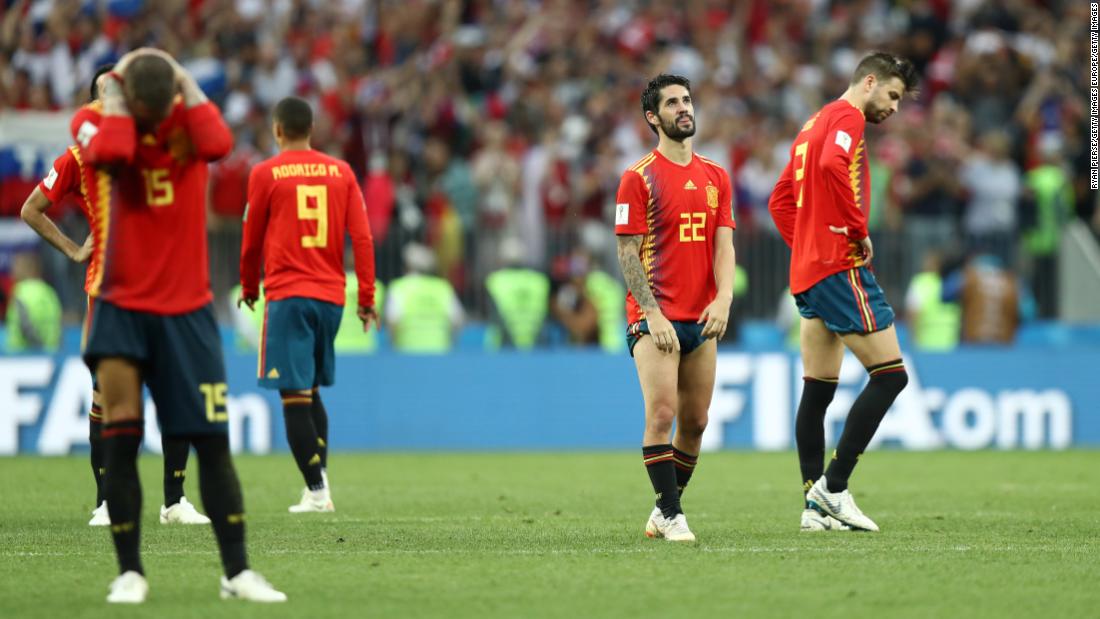 Visit CNN.com/sport for more news and features
As penalties loomed, Spain upped its tempo and incisiveness — substitute Rodrigo’s driving run into the box forced Akinfeev to save with his legs.
In the 24th minute of extra time, Pique and Ramos both claimed they were fouled in the box as they vied for Koke’s freekick but the VAR officials did not deem the incident worthy of a penalty.
As the rain thrashed down, the tension rose and the decibels inside the stadium increased. But there was no route through for the Spaniards and the outcome was decided by the ultimate test of nerve.
In failing that test, Spain becomes the latest big-name casualty of Russia 2018.