A goal awarded after Paul Pogbas shot bounced just over the line gave France a 2-1 win against Australia in their World Cup Group C opener, after the sides had traded penalties 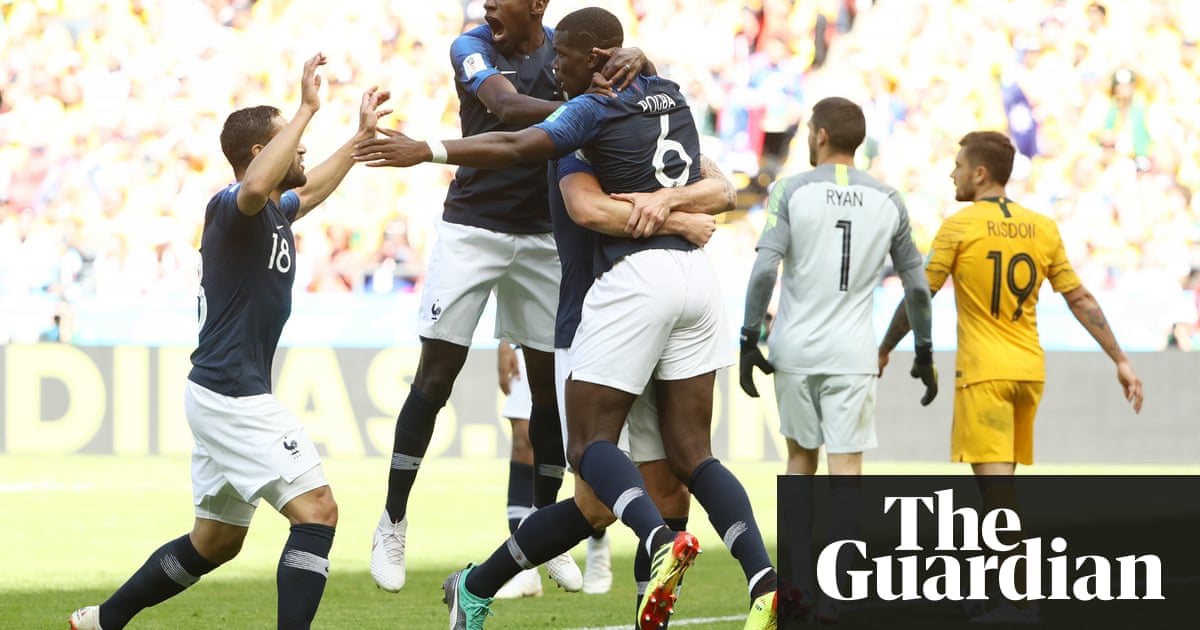 This was a game the like of which the World Cup has not quite seen ever before. A culture clash between the underwhelming French and the resilient Australians was an unyielding affair on the pitch so much, so expected but the most influential component, chip of the match if you will, was off-pitch technology. The goals in this narrow French win came courtesy of a VAR-assisted penalty and a GLT-awarded matchwinner.

It was an eventful afternoon for the full-kit video referees, who assisted the Uruguayan official in the middle of it all, Andrs Cunha, in exemplary fashion. Critics of technology might have their reservations but in real time, in the Kazan Arena, the reactions were quick, decisive and correct. It all seemed a world away from Frank Lampards infamous over-the-line-yet-not-given goal in South Africa 2010 as Paul Pogba was able to pause with his arms outstretched in vague uncertainty for just a few seconds before the signal came that he could celebrate his deflected shot bouncing down off the crossbar and over that white line.

It proved a very welcome winner for France after a largely stodgy performance. Although this game presented itself as a challenge to Australias powers of containment, it soon turned into a test of character for Les Bleus. Didier Deschamps team is constructed around the vigour of youth, with seven of the starting XI playing in a World Cup finals for the first time, and Australia were in no mood to stand aside and allow too many dashing runs go unchecked. Bert van Marwijk had called for guts and got gallons of them.

Frances bright start offered a flash of what Deschamps had in mind by teaming up Kylian Mbapp, Antoine Griezmann and Ousmane Dembl up front. Mat Ryan had to deal with three shots on target in the opening five minutes. The best of them came as Mbapp seared in from the right and instinctively slammed in a fierce strike. The 19-year-old broke into a sweet smile as if to suggest this World Cup lark was just up his street.

Ols from the banks of gold-shirted Aussies when there team managed to weave a handful of passes together suggested they were happy enough avoiding the perils of doing a Saudi Arabia. But it soon became apparent their team were both solidly structured and highly motivated enough to execute a plan that would cause significant problems for France. Nobody expected we could play like this against France, noted Van Marwijk. In a lot of moments they didnt know what to do any more. Food for thought for France, whose front three struggled to click and whose midfield sat too deep to orchestrate the game.

In the 17th minute Australias optimism levels soared as they forged a threatening opening. Set pieces were always going to be a significant part of the plan and the classy Aaron Mooys lofted free-kick unnerved France, Mathew Leckie glanced on and Corentin Tolisso stabbed out an unconvincing foot. The ball ricocheted, fizzing low towards the bottom corner. Hugo Lloris had to react sharply to palm the ball behind his left post.

Australia were firm in the tackle, quick on the chase, organised, direct. Goalless at half-time, the Australians whooped. France looked hassled, a bit antsy, needing some inspiration. For all the excitement about their talent pool, they looked less than the sum of their parts.

The game tilted with a sudden dramatic twist. Frances midfield pulled itself together to win the ball and release Griezmann on the run, for once finding the space for a forward sprint. Joshua Risdon dived in and tripped Griezmann. Referee Cunha, unmoved to begin with, got the nod to consult the pitchside replays and returned to the pitch with two gestures: first the television sign, then the penalty. Griezmann slotted the opening goal past Ryan although he was later substituted unhappily.

Australia launched back and within four minutes had a penalty of their own. Bizarrely, Samuel Umtiti jumped at Mooys cross, arm raised, eyes closed, apparently not in the zone to deal with it at all. The ball grazed his fist. This time there was no need for VAR. Cunha saw it and gave it. No debate, no doubt. Mile Jedinak sent Lloris the wrong way.

France retook the lead with another dash of theatrical flourish. The build up was born of beautifully deft, quick passing. Paul Pogba was at the heart of it, exchanging moves with Mbapp and Olivier Giroud before his shot nicked off Aziz Behich and looped over Ryan, against the crossbar, and in. Not in by much, mind, but enough for the goalline technology buzzer to inform Cunha to award the goal.

For France, it was enough, but they will be looking to up their game. Australia huddled in the centre circle at the end of it all. They had given their all but know they can take positives forward.

I am proud and disappointed, said Van Marwijk. I had questions if I was afraid to lose 5-0, but everyonecan see this is a different team. One of the most positive things is that we showed guts and that we could be ourselves.

“I Hear It All the Time: With Technology Today, We Dont Need the Post Office. Why Are You Guys Still Around?”: Mailman Writes Honest...

Tiny 40,000-Year-Old Yarn Made By Neanderthals Is Earliest Evidence Of Fiber Technology