Top comics pick the routines that make them howl with laughter, from Eddie Murphy on Rocky to Eddie Izzard on penknives and Michelle Wolf on womens worst enemies 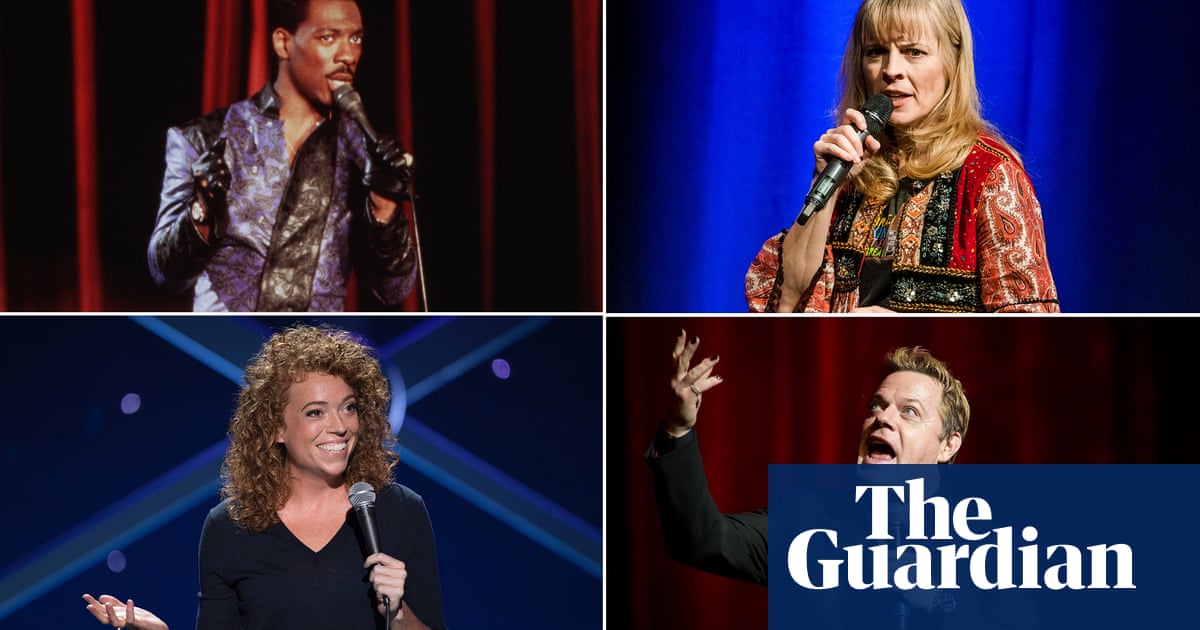 Five sublime minutes about absolutely nothing at all

Andy Dalys mock standup routine about nothing at all has a cult following among comedy fans. The US comic, a regular on shows including Conan, steps into character as bland-but-confident observational comic Jerry OHearn. And somehow he is able to create five incredibly funny minutes without once actually saying anything specific.

I first saw the routine about eight years ago. Theres a YouTube clip of a bootleg recording tagged: Jerry OHearn (Andy Daly) at MaxFunCon 2011. Daly is quick to establish OHearns outlook: All this stuff thats going on in the world today? You gotta be kidding me! What follows is ambiguous, meaningless standup that is nevertheless delivered with the self-righteous bafflement of a man convinced he is setting the world to rights. Its a detail-free jaunt through every classic standup subject, running on gusto alone.

The routine is not just very entertaining, though. From a nerdier technical perspective, its amazing to see that standup, stripped entirely of any actual content, can still be recognisable as standup. Watching that clip, with its glaring light and distant sound, one gets the pleasure of a niche discovery of something unique, daring, clever, silly and gloriously vague.

Snakes in a can!

When I was in my teens, big acts rarely travelled to New Zealand, so I enjoyed most of my standup through comedy albums I borrowed from the library or CDs bought from the shop. My favourite was the 2007 album Impersonal by the US comic Paul F Tompkins.

My most listened-to track was Peanut Brittle. The entire routine is about those novelty cans labelled peanut brittle that actually contain spring-loaded snakes. The skit is completely perfect, flowing seamlessly between observations about the stupidity of the product and impressions of execs trying out new fonts for the can to keep the product relevant. It culminates in a lengthy section where Tompkins becomes a naive recipient of the can, oblivious to the prank within.

I attribute most of my comedy taste and style to this routine. I learned so much about rhythm from Tompkins. Great standup requires an equal balance of strong performance and strong writing: when you see the perfect alchemy of those, it feels like actual magic. I love Tompkins for all the reasons I love comedy: he makes the obscure or niche into something relatable, with stupid voices, SHOUTING, and a celebration of shared human experience. Thats comedy, baby!

Rose Matafeos podcast Boners of the Heart is on Apple Podcasts, Acast and Spotify. She is on Twitter @Rose_Matafeo.

Back in 2006, when I was performing at the Just for Laughs festival in Montreal, I was still quite naive and nervous about standup. It all felt blokey and loud. But then, backstage at a gig, I saw a comic who looked really nervous and thought: Oh, theres someone a bit like me. Her name was Maria Bamford and she made me realise there were other comics out there doing material about their personal insecurities. When she talked about how she perceived the world, I found it so inspiring.

I saw her Burning Bridges tour at Edinburgh that year. There was one routine, Celebrity Homes, that I particularly loved. It was based on those US TV shows about famous peoples houses that are always presented as: Ive got a huge house, youd love to see it!

She did a perfect impression of those shows, then another as if theyd come to her own home, an apartment. Lets go sit on the futon, look through the bars on the window, and watch the helicopters circle! It really summed up the contrast of her very real world compared to the shiny TV world often portrayed on screen.

It took me a long time to learn that you need to be confident in your own insecurities for people to want to listen to them and Bamford helped with that. Her comedy is alternative standup at its finest storytelling from the outside looking in.

I first heard the Swiss Army Knife routine on the radio in my dads car. I was being dropped off at the cinema but remember thinking the film could wait, as Eddie Izzard went through each instrument of war on his knife one by one: I can see you with my magnifying glass! I was giddy with how silly it all was.

His Swiss accent instantly makes you want to do one yourself: My little saw! I would re-enact the routine with my own penknife. How that looked out on Tooting Bec Common, I dont know. The routine is only about a minute long yet its impact was great. When you stumble across a comedian, and are still too young to realise how famous they are, a skit can feel like its been tailor-made for you. Its your secret and youre torn between sharing it or keeping it to yourself.

Swiss Army Knife is part of Glorious, a film of a gig Izzard did in 1997 that is striking for its ambition and scope. Beginning with the Old Testament and ending with Armageddon, he roots everything in the tiniest of details. On the first day God created baked potatoes and crinkly things very small avenues toilets in French camping sites.

Whats so inspiring about the Swiss Army Knife routine, and the entire Glorious album really, is the amount of work that must have gone into it. Not a word is wasted, nothing is left to chance. In this great showcase of lifes tiny absurdities, there must have been hours and hours of failure before he perfected the sound of a tiny saw going back and forth. Its a reminder to me that there are no short cuts in comedy. Only hard work can make a performance look so effortless.

Microscope, John Kearnss podcast with Mat Ewins, is on Apple Podcasts, Acast and Spotify. He is on tour later this year for rescheduled dates, see Twitter @johnsfurcoat

The fight for equality with scissoring jokes

Lou Sanders: Michelle Wolfs Women are Their Own Worst Enemies

Last Christmas I sat down to watch Michelle Wolfs latest Netflix special, Joke Show. About 30 minutes in, the US comedian talked about how women will never be equal with men because we judge each other so harshly instead of sticking together. Thats something I think about a lot.

Wolf is surprisingly critical of women giving men a hard time. For example, if a guy is manspreading, she says, hes not doing it maliciously hes just not thinking. It reminded me of when I was on a long-haul flight. I was in the middle seat with a woman one side and a man the other. The man was really dominating my space: two armrests, heavy breathing, that kind of thing. I didnt ask him to move because Im an idiot. I just moaned to the woman that he was in my space and rolled my eyes. When we landed, I found out they were a married couple! Theyd made me sit between them, the mad twots.

Im making it sound dry, but the routines actually funny and wise with lots of silly jokes about women scissoring. Since everyone is represented equally heinously, guys cant be offended. Shes tearing us all a new one. The routines a manifesto, except Wolf also jokes about how the kind of people who write manifestos are wackos. So its not really a manifesto. Its just good standup.

Cuddle Club, Lou Sanders podcast, is available on Apple Podcasts, Acast and Spotify. Shes on tour later this year with Say Hello to Your New Step-Mummy. Dates at lousanders.com.

Sly and the knockout realisation

I first watched Raw, the film of Eddie Murphy doing standup in the 1980s, when I was about 16. I found it on YouTube, which is how I discovered most comedy when I was a teenager. There are few people that can do voices and act-outs so well. He does an Italian guy coming out of a cinema and telling another guy about watching Rocky.

You know what I like about Slys movies? he says. The realism. I used to crack up every time I heard that. This dude, whos obviously not a film critic, is trying to intellectualise the film to suit his own narrative. At times, it doesnt even feel like its Eddie any more: you feel like this character has become real. He has such flair: it all seems so effortless as he makes every character feel authentic and unique. Even if they have a similar accent, they have different voices and distinctive mannerisms.

When I was in school, I would do a lot of voices and impressions. Id spend hours watching Eddie to see how he created a character. There was always a purpose to the voices and impressions: they formed a story or were part of a situation. There is no point doing impressions just to show people you can do them. Whats their purpose?

It made me understand that people love things they can relate to. Ive tried to stay true to that. I love that routine because hes not trying to preach to you like a lot of modern comics do. Its just Eddie Murphy being effortlessly funny.

Kae Kurd is touring the UK with Spoken Kurd from October. Tickets: www.kaekurd.com.