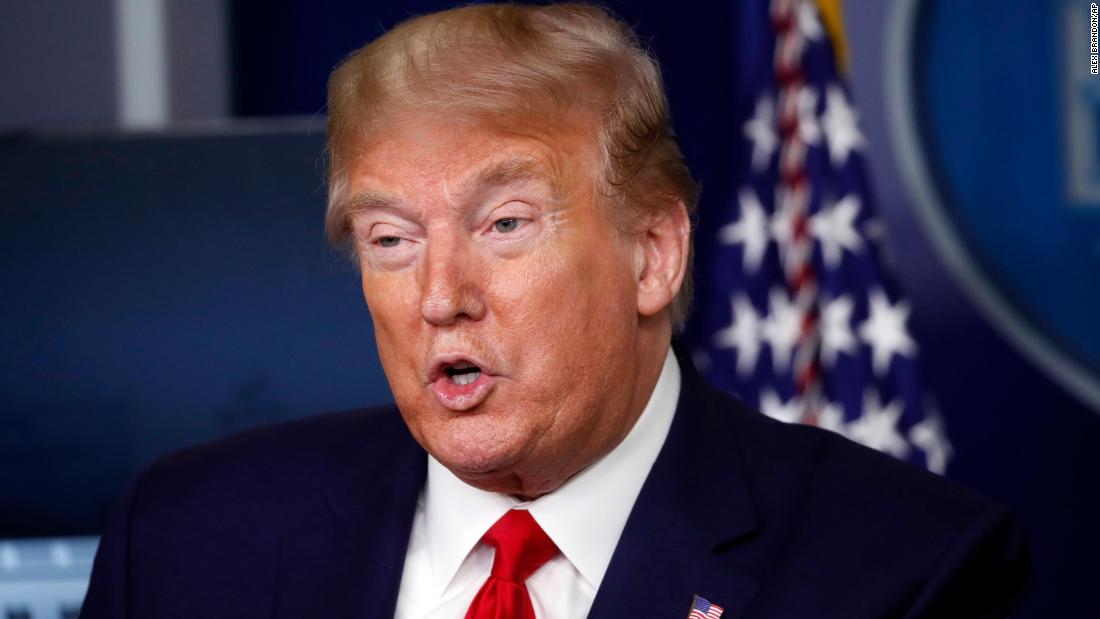 Washington (CNN)A reporter reminded President Donald Trump that he held campaign rallies in February and March. He responded by suggesting he didn’t recall these rallies — and saying that hasn’t left the White House in “months” except for a coronavirus-related trip to Virginia in late March.

Though numerous Republicans and independent experts have emphasized the importance of a major increase in coronavirus testing, Trump claimed that talk about testing is “not bipartisan” and is happening to try to damage him politically. He also repeated his usual inaccurate claim that he had banned travel from China and Europe, his usual exaggerated figure for the past US trade deficit with China and his usual erroneous description of a comment from President Barack Obama about manufacturing jobs.

Trump claimed people are talking about the need for more coronavirus testing because they want to damage him politically, paraphrasing their supposed thoughts as follows: “‘Testing, testing. Oh, we’ll get him on testing.'”
Later, asked why he sees the bipartisan outcry over testing as a personal attack, Trump said, “It’s not bipartisan. It’s mostly partisan.”
Facts First: Concerns about testing are indeed bipartisan. The Republican governors of Ohio, Nebraska, Maryland and Massachusetts, Republican Senate health committee Chairman Sen. Lamar Alexander and other Republicans have all spoken in the last week about challenges obtaining testing materials or the need for more testing. Experts outside of government have emphasized that a major increase in testing is essential if the country is to safely lift social and economic restrictions.
Among the many people who have said that far more testing is needed for an optimal reopening of the country are Trump’s own former Food and Drug Administration chief, Dr. Scott Gottlieb; professors at Harvard University and numerous other academic institutions; and corporate executives who directly conveyed their message to Trump on a phone call last week.
Experts have also been widely critical of the speed at which tests were initially deployed, saying that the US missed a chance to slow the spread of the virus.

During an exchange with “PBS NewsHour” White House correspondent Yamiche Alcindor, Trump claimed he hadn’t “left the White House in months” except to send off the USNS Comfort, a hospital ship sent from Virginia to aid New York.
When Alcindor reminded him that he had campaign rallies in February and March, he suggested he couldn’t recall doing so.
Alcindor: “You held rallies in February and in March and there are some Americans …”
Trump: “Oh, I don’t know about rallies. I really don’t know about rallies.”
Alcindor: (Partly inaudible, but she again mentioned his February rallies.)
Trump: “I know one thing. I haven’t left the White House in months except for a brief moment to give a wonderful ship, the Comfort.”
Alcindor: “You held a rally in March.”
Trump: “I don’t know. Did I hold a rally? I’m sorry. I hold a rally. Did I hold a rally? Let me tell you, in January, when I did this, we had virtually no cases and no deaths.”
Facts First: Alcindor was correct: Trump held five campaign rallies in February and one on March 2. He left the White House on several occasions in March.
After the campaign’s last rally on March 2, Trump continued to travel, albeit not frequently. On March 6, he visited the Centers for Disease Control and Prevention headquarters in Atlanta, stopping on the way in Tennessee after a tornado killed 25 people. He then spent the weekend at his Mar-a-Lago club and residence in Florida. He visited the Federal Emergency Management Agency headquarters in Washington on March 19. As he said, he also left the White House on March 28 to send off the Comfort.

The President again pushed back against criticism of his administration’s response to coronavirus by touting travel restrictions he announced at the end of January and in mid-March.
Trump said: “We put on a ban of China where China can’t come in and before March we put on a ban on Europe where Europe can’t come in, so how could you say I wasn’t taking it seriously?”
Facts First: The travel restrictions Trump announced against China and Europe are not total bans; they contain multiple exemptions. Only foreign nationals who had been in China, Europe’s Schengen area, the UK or Ireland within the past 14 days are outright banned from entering the US.
As of February 2, US citizens who had been in China’s Hubei province in the two weeks prior to their return to the United States are subject to a mandatory quarantine of up to 14 days upon their return to the US. American citizens returning from the rest of mainland China may also face up to 14 days of quarantine after undergoing health screenings at selected ports of entry.
The broader European travel suspension Trump announced on March 11 applied to the 26 countries in the Schengen area, a European zone in which people can move freely across internal borders without being subjected to border checks. While Trump initially identified the United Kingdom as exempt, additional countries that are not in the Schengen area and thus also exempt from the restrictions include Ireland, Croatia, Cyprus, Bulgaria, Romania, Ukraine, Serbia, Armenia, Montenegro, Belarus and Russia. As of March 14, the ban was expanded to include foreign nationals traveling from UK and Ireland.
The restrictions also did not apply to US citizens returning from Europe as well as permanent US residents and certain family members of both citizens and permanent residents.
You can read more about the European travel restrictions here.

When pressed about ongoing issues with the country’s coronavirus response, Trump repeated several other falsehoods he’s made previously on topics unrelated to the pandemic in an attempt to illustrate his successes as President.
Trump said that the US used to have a $500 billion trade deficit with China, citing this figure as evidence of how he believes the US has been taken advantage of economically under previous administrations. Trump claimed before he took office, China “came in and they took $500 billion a year for many years, anywhere from $200 (billion) to $550 billion a year out of our hides.”
Facts First: There has never been a $500 billion or $550 billion trade deficit with China. (Trump describes trade deficits as “losing,” though many economists dispute that characterization.) The 2018 deficit was $381 billion when counting goods and services, $420 billion when counting goods alone.

What Obama said about manufacturing

While bemoaning the recent coronavirus-induced economic downturn, the President talked about how his administration “built the greatest economy in the history of the world.” According to Trump, the US economy was the greatest based on a variety of metrics including manufacturing numbers, despite the fact that “the previous administration said manufacturing was dead for our country.”
Facts First: Trump’s comments appeared to refer to a remark Obama made at a PBS town hall in 2016 — but he was inaccurately describing what Obama had said.
Obama scoffed at Trump’s promises to bring back what Obama called “jobs of the past” without providing specifics on how he would do so. Contrary to Trump’s claims, though, Obama didn’t say manufacturing was dead or that new manufacturing jobs could not be created; Obama boasted of how many manufacturing jobs were being created during his presidency, saying, “We actually make more stuff, have a bigger manufacturing base today than we’ve had in most of our history.”

A quote from Andrew Cuomo

Where now for travel? Lonely Planet closures point to an uncertain future