The presidents advice involves ingesting bleach, which for some of us is beginning to seem like the only rational response, says Guardian columnist Marina Hyde 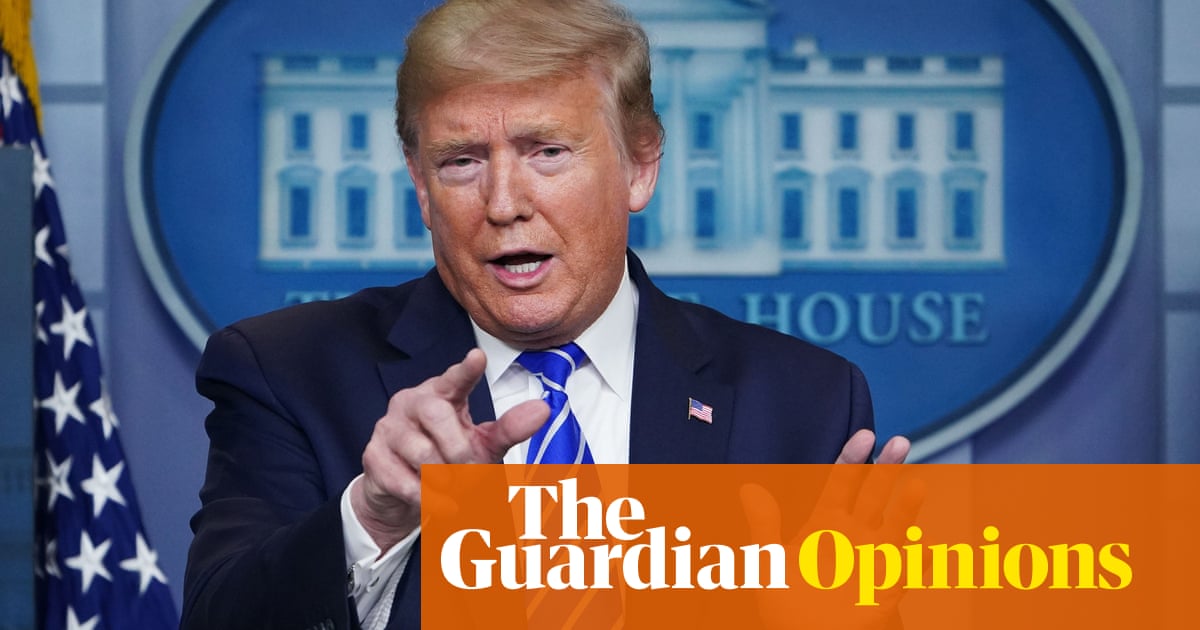 Interesting developments in Americas elect-your-id experiment, as the shining city upon a hill runs up against that age-old political question: Quis custodiet ipsos custodes? Which is Latin for who lung-bleaches the lung bleachers?

The inquiry arises after Thursdays White House press conference, which saw Donald Trump offer his latest symposium on how to kill a country. I see the disinfectant where it knocks [the virus] out in a minute, he gibbered, live on national television. One minute! And is there a way we can do something like that, by injection inside, or almost a cleaning? So itd be interesting to check that. Wouldnt it? Lets pop it on the to-do list, right below staple our eyelids to the floor. Another interesting thing to check would be the precise theoretical point at which deciding to ingest bleach becomes the tragically rational response to the fact that a sitting president is suggesting Americans ingest bleach. For now, though, lets just include the presidential caveat. Pointing to his head, Trump went on: Im not a doctor. But Im, like, a person that has a good you-know-what.

There we are, then. In the lockdown era, weve all been making do with long-forgotten tinned food and whatnot that weve found around the house. So it makes sense that the United States president would be coming up with the sort of stuff that Sauron or Gwyneth Paltrow would pull if they only had access to the cupboard under their kitchen sink.

Even so, it is increasingly impossible to see Trump himself as anything other than a diagnostic agent, a sort of barium meal run through the system to test the strength of the US checks and balances. They are how to put this sufficiently plainly? failing. Indeed, the word failing itself feels like its failing, given the sheer weight of deficiency and dereliction it is currently being required to bear.

On Twitter, the platform to which Trumps you-know-what is fused, the news is panned daily for suggestions that someone anyone in anything approaching a position of power gets this. Every day brings another series of clips of public health officials, whose thousand-yard stares are turning into million-yard stares, and who are presumably too busy trying to protect a pandemic-stricken nation from the attentions of a quarterwit to source a Claus von Stauffenberg costume. The Republican establishment many of whom would have something serviceable already hanging in their locked closet have long preferred to wear the mark of Cain.

As have certain Trump media cheerleaders, who were apparently fine with all the racism and the pussy-grabbing, but today seem to have judged the Dettol chronicles the bit that might finally cause blowback to their own personages. Im afraid all we can say to this is: DO ME A FAVOUR. Only grifters who spent years going Trump will surprise people are surprised by this. This is on them, too. Change sides now, by all means better late than never but do be aware that the historical record is always very clear on such switcheroos. Or to put it another way: Mussolini was, at all stages on his journey, a complete shit. Youre Mussolini.

In any case, Trumps handling of the Covid-19 crisis was always predictable pathologically. Youre asking a man who got to the Oval Office by going viral to disavow a virus. Its not very surprising that Trump cant bring himself to. You have to think he recognises something of a kindred spirit in the disease, which is indifferent to all human suffering, impacts disproportionately on ethnic minorities and is horrifyingly resistant to therapy.

In terms of behavioural science, then, perhaps the best way to encourage Trump to defeat the virus would be to make him professionally jealous of it. At present he just regards it as a supporting cast member, occupying the Apprentice boardroom-sidekick chair once held by that other disease particle, Don Jr. Or as the president put it this week in reference to his nightly press conferences that should ideally be guiding Americans on how not to die: Ive had great ratings my whole life, theres nothing unusual about that for me. The White House News Conference ratings are through the roof (Monday Night Football, Bachelor Finale) Congratulations to the star, showrunner and executive producer for having the vision to deliver this thing. Then again, shows with high body counts have always rated highly on US TV.

Back on our own shores, meanwhile, the one useful moment in the Trump press conference was the bit where he imparted some any information about Boris Johnson, who remains off games. As you may recall, Britain has not had a working prime minister for some weeks now, in a moment of maximum crisis. But there is a sense fostered by some of the most obnoxious people on Earth that it would somehow be uncouth to dwell on how or even if decisions are being made. Instead, we are led by a cabinet rat king, with Dominic Raabs tail entwined with those of Matt Hancock, Michael Gove and Rishi Sunak. Eventually one of them probably Sunak will manage to bite off their own appendage to set themselves free. For now, the factions nip at each other off the record and sometimes, at Johnson. The prime minister is in a funny place, ran one kindly monstering a few days ago. I think hes quite frightened. I bet you do.

The one entity everyone wants you to think is in charge, though, is The Science. Of all the seven phrases of magnetic fridge poetry that are rearranged each day to fashion a 5pm briefing, the most ominous is surely We have, at all times, been led by the science. This is untrue, no matter how many times they say it. We have, at all times, been led by the government, whose job it is to take the scientific advice and make political decisions based on it. The ministers do not, in fact, all work for The Science, the most suspiciously shadowy overlord since Keyser Sze.

The Science is not some monolithic stone tablet that gets handed to Raab to read out to the masses and all scientists themselves know this. The claim that government would be led by the science was reassuring many weeks ago, at the start of all this. But now, through suspicious overuse to the exclusion of all other considerations, it has become troubling. Whenever some politician standing next to him says it these days, my overactive imagination fancies it sees a flicker behind the eyes of Chris Whitty. Is he realising that they are fitting him up to be the guy who needs at least 36 changes of shirt for the inevitable public inquiry? This week, some scientists advising the government told Buzzfeed they feared they will be used by ministers as human shields at such an event.

Will they? You certainly wouldnt rule out Dominic Cummingss Downing Street believing theyve alighted on the perfect way to insulate themselves from blame using scientists as a prophylactic. Call it a nerd immunity strategy, and pour yourself a celebratory disinfectant.

Marina Hyde is a Guardian columnist