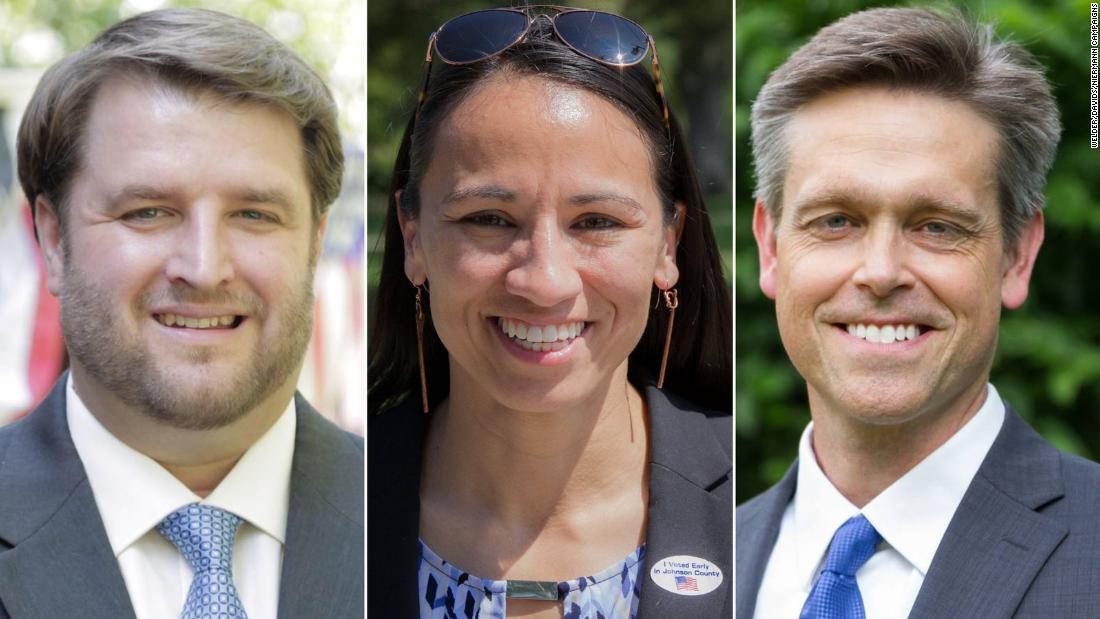 (CNN)Democrats in the Kansas City suburbs are set to decide on Tuesday what type of candidate they believe can win in a red state during Donald Trump’s presidency.

It pits a candidate running far to the left against someone trying to appeal to the center. There’s also a woman vying to become the first openly lesbian Native American in Congress.
The winner will take on Republican Rep. Kevin Yoder, who represents the district that Hillary Clinton won by 1 point in 2016.
The Democratic primary is a six-way free-for-all. Democrats say they believe at least three candidates have a shot at winning — and they have no idea who’s ahead.
On the left is labor lawyer Brent Welder, who rallied recently with Vermont’s independent Sen. Bernie Sanders and Alexandria Ocasio-Cortez. Welder has campaigned for single-payer “Medicare for all” health insurance, a $15-an-hour minimum wage and other progressive priorities.
“You have to convince them and you have to be honest about a progressive, populist economic platform, so that they don’t get lured away by right-wing social wedge issues like they did by Donald Trump,” Welder said in an interview. “And I think the Democratic Party for far too long has been straying from a bold, populist economic message. That’s the reason we keep losing.”
Welder told The Guardian last year that he had “struggled” to vote for Clinton in 2016 and considered backing the Green Party’s Jill Stein.
He was an early adopter of a rule that’s become popular with Democrats angling to run for president in 2020: eschewing corporate political action committee donations.
Still, he said, the money has poured in, including $225,000 in July with an average donation of $18.58.
Ask Welder which types of voters Democrats must win in order to oust Yoder, and he points to those who backed President Barack Obama in 2008 and 2012 but then voted for Trump in 2016.
Another candidate, high school teacher Tom Niermann, offers the opposite take. In an interview, he said Democrats’ road to victory is through moderate suburbanites — people who voted for Mitt Romney in 2012 and Hillary Clinton in 2016.
There are plenty of them: Romney won the district by 10 points in 2012, while Clinton won it by 1 point in 2016.
“They’re pretty centrist in their positions,” Niermann said of voters in the district. “They have a great value that they place on good government that is responsive to the needs of people in the community.”
His positions are similar to Welder’s, but Niermann says that while he supports Medicare for all conceptually and as a long-term solution, he favors bipartisan efforts to reduce health care costs in the short term and with a divided Washington.
Niermann is touting his lengthy ties to the area, including local officials’ endorsements. As a teacher, he could capitalize on this spring’s protests over education funding.
He has told personal stories about his wife being denied insurance because of a pre-existing condition. Campaigning for gun control measures, Niermann has pointed out that he once had a gun brought into his classroom and that two of his students were killed as a result of gun violence.
Niermann highlighting his local ties is an implicit contrast with Welder, who moved to Kansas from St. Louis last year. Welder has pointed out that his wife is from the district and he helped Sanders’ 2016 campaign organize there.
Then there’s the clear trend in Democratic primaries this year: Women are winning the vast majority of competitive races. If that trend extends to Kansas, the likely beneficiary would be Sharice Davids — a former White House fellow and former professional mixed martial arts fighter who will become the first openly lesbian Native American in Congress if she wins in November.
Davids, like Niermann, has staked out more moderate positions than Welder. But she is the beneficiary of $400,000 in television advertising from EMILY’s List, a group that backs Democratic women running for political office.
Davids said she “can appreciate this national dialogue that’s going on” as Democratic women emerge from competitive primaries.
“People are winning when they’re connecting with people. And I’m definitely trying to make sure I do that,” she said.
With limited public polling in the race, it’s not clear who leads heading into Tuesday’s primary.
Further complicating the campaign is that businesswoman Sylvia Williams is spending her own money on a late television advertising push — making her a wild card, too.
A national Democratic operative working on House races said the party believes Yoder remains vulnerable no matter who emerges from Tuesday’s primary.