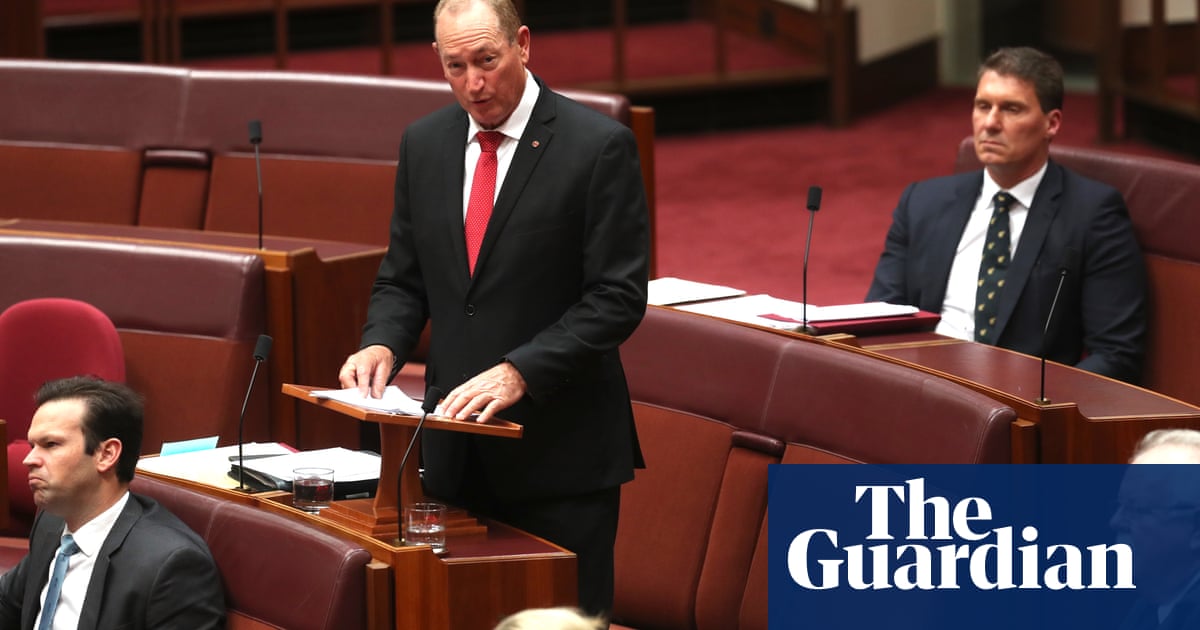 An Australian crossbench senator has invoked the term the final solution in an inflammatory speech calling for a plebiscite asking voters whether they want to end all immigration by Muslims and non-English speaking people from the third world.

Fraser Anning, formerly of the far-right Pauline Hanson One Nation party, and now a member of the Katters Australia party, used his maiden speech in the Senate to call for a plebiscite to allow the Australian people to decide whether they want wholesale non-English speaking immigrants from the third world, and particularly whether they want any Muslims.

His comments were widely condemned on Wednesday. Malcolm Turnbull said he condemned racism and said Australia was the most successful multicultural society in the world. Cabinet minister Mitch Fifield said the speech was deeply regrettable, telling Nine Network: I thought we had moved beyond this in the parliament. Australia is a warm and open nation.

He said neither the former Labor prime minister Gough Whitlam, nor any subsequent government, had asked Australians what kind of immigration they wanted. What we do need a plebiscite for is to decide who comes here.

Anning declared on Tuesday the reasons for ending all further Muslim immigration are both compelling and self-evident.

The record of Muslims who have already come to this country in terms of rates of crime, welfare dependency and terrorism are the worst of any migrant and vastly exceed another immigrant group, he said.

The majority of Muslims in Australia of working age do not work and exist on welfare. Muslims in New South Wales and Victoria are three times more likely than other groups to be convicted of crimes.

We have black African Muslim gangs terrorising Melbourne, we have Isis-sympathising Muslims trying to go overseas to try and fight for Isis and while all Muslims are not terrorists, certainly all terrorists these days are Muslims.

So why would anyone want to bring more of them here?

Anning contended Australia should return to a position where immigrants were not entitled to receive welfare payments for the first five years after their arrival. In the days of Menzies, immigrants arriving here were not allowed to apply for welfare and that attracted exactly the right sort of hardworking people this country needed.

We should go back to that and ban all immigrants from receiving welfare for the first five years after they arrive, he said.

The senator then invoked the term final solution in calling for his preferred plebiscite on the immigration problem.

The final solution to the immigration problem, of course, is a popular vote.

Labors Senate leader, Penny Wong, blasted the contribution shortly after delivery on Tuesday evening. My parents were married in the dying days of the white Australia policy, she told Guardian Australia. Weve rightly consigned that policy to the dustbin of history.

The Labor MP Tim Watts said Annings contribution was beyond the pale, and he warned the central ideas in the speech were becoming normalised in Australian political debate.

This man is emboldened to say what he has in this speech because Malcolm Turnbull has remained silent while conservatives have pandered to bigots under the guise of freedom of speech, while Australians from immigrant backgrounds, particularly Australians of colour, have had their status as Australians of equal dignity called into question, while entire ethnicities have been vilified, Watts said in a Facebook post.

The reality of Australian society our neighbourhoods, our schools, our sporting clubs, our community groups do not reflect the racial divisions that we see pursued by conservatives in our media and political debate.

It is the conservatives who are out of touch with the successful multicultural nation that Australians enjoy in their everyday lives, but Malcolm Turnbull is too weak to state this simple truth.

So we have to put up with rubbish like this.

With condemnation of the contribution escalating, Anning issued a statement after the speech arguing that criticism of his use of the term final solution was an effort by the left to shut down debate.

Claims that the words meant anything other than the ultimate solution to any political question is always a popular vote are simply ridiculous, Anning said. Anyone who actually reads them in context will realise this.

Some in the media and left wing politicians are simply afraid of the Australian people having a say on who comes here.

As I called for a plebiscite on the immigration mix, this baseless and ridiculous criticism is simply an effort to play the man and not the ball.

It is ironic that those on the left such as the Greens and some Labor who seek to criticise me are the same people who refused to support my efforts to stop Australia funding the Palestinian Authority who finance terrorist attacks against innocent Israeli women and children.

Australias outgoing race discrimination commissioner, Tim Soutphommasane, has recently declared that race politics is back in Australia. He criticised various Turnbull government ministers for their rhetoric on African gangs and ethnic separatism in a fiery final speech before departing his post at the Australian Human Rights Commission.

Soutphommasane said when he took the job as race discrimination commissioner five years ago he wouldnt have expected that the biggest threats to racial harmony would come from within our parliaments and from sections of our media.

Yet here we are, he said. This is dangerous territory.

When politicians resort to using race in advancing their agendas, they inevitably excite racial anxiety and stir up social division.

They end up damaging our racial tolerance and multicultural harmony.