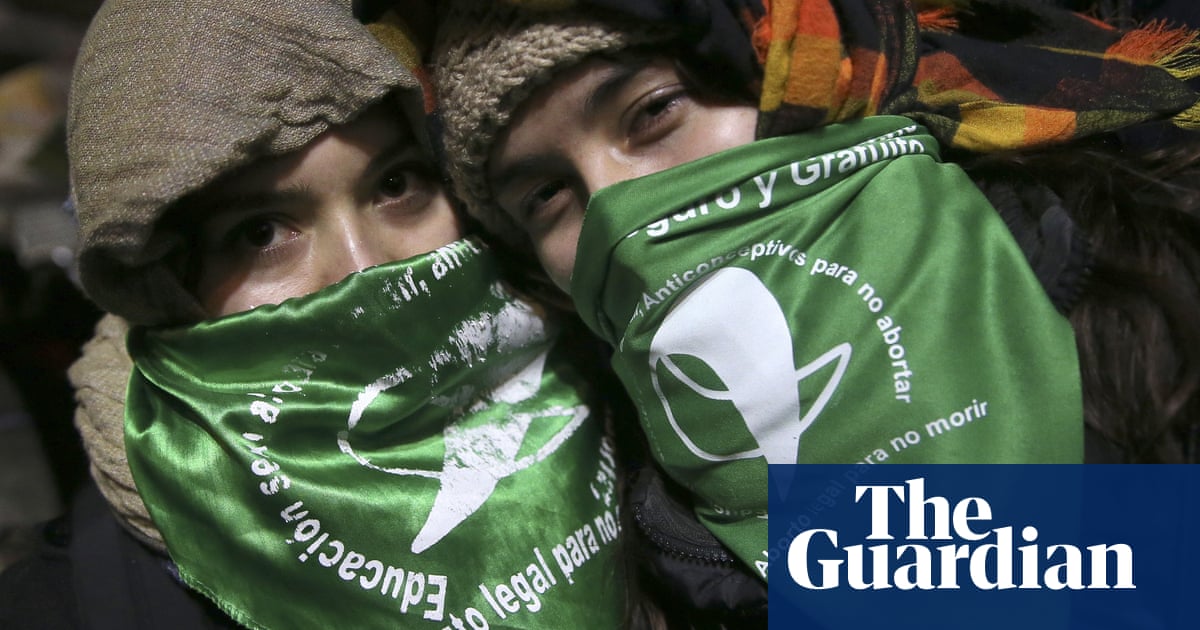 Argentinas senate has rejected a bill to legalise elective abortion in the first 14 weeks of pregnancy.

Lawmakers debated for more than 15 hours and voted 31 in favour to 38 against, despite the fact opinion polls showed the legal abortion bill had strong public support

Pressure from the Catholic church prevented its approval, according to female activists who supported the bill. Argentina is the homeland of Pope Francis.

The church put pressure on senators to vote against the bill, said Ana Correa, an original member of the #NiUnaMenos (Not one woman less) feminist movement that supported the bill.

The lower house had already passed the measure and President Mauricio Macri had said he would sign it.

Rejection of the bill means that abortion remains legal only in the case of rape and danger to the life of the woman.

Mariela Belski, Argentinas Amnesty International director, said: A survey we did this year showed 60% support for an abortion law.

Hundreds of thousands of people, mostly women, braved a cold and rainy night to stand vigil outside Congress on Wednesday while the votes were counted inside. Despite the final result of the vote, many women said they believed Argentina would have legal abortion eventually.

Im still optimistic. It didnt pass today, but it will pass tomorrow, it will pass the next day, said abortion rights supporter Natalia Carol, 23. This is not over.

Journalist Silvina Mrquez, who joined the crowd outside Congress early in the afternoon, said: We might not have a law today, but it is going to happen. Argentina is not going back to this, it is important for the women, especially for the young women. So sooner or later well have an abortion law.

What this vote showed is that Argentina is still a country that represents family values, anti-abortion activist Victoria Osuna, 32, told Reuters.

A nearby group of secondary school students, megaphone in hand, chanted: Beware, beware, machistas [chaunvinists] beware, all Latin America will be feminist.

Argentinian-born Pope Francis, who remains deeply involved in the politics of his home country, has made no secret of his opposition to the bill. On Monday, the Clarn daily newspaper reported the pope has asked anti-abortion legislators to pressure fellow lawmakers to reject the bill.

Despite a recent survey that showed 71% of Argentinians opposed political interference by the church, leading Catholic authorities have spoken out recently against the bill. This would be the first time a law is passed in democratic Argentina permitting the elimination of a human being by another human, Monsignor Oscar Ojea, president of Argentinas synod of bishops, said in homily at the Basilica of Our Lady of Lujn, one of Argentinas leading pilgrimage sites, last month.

In a pointed signal, Bishop Ojea and and Cardinal Mario Poli who succeeded Jorge Bergoglio as archbishop of Buenos Aires after Bergoglio became Pope held a mass on Wednesday at 8pm at Buenos Aires Cathedral while the senators debated the bill.

Although the law as it stands also permits abortion when there is risk to the womans health, few of Argentinas 23 provinces have implemented this third instance.

Senators and anti-rights can go to sleep pleased that they saved the lives
of people who literally speaking do not exist and pleased that they fought
for women to keep dying, tweeted well-known comedian and legal abortion
activist Malena Pichot.