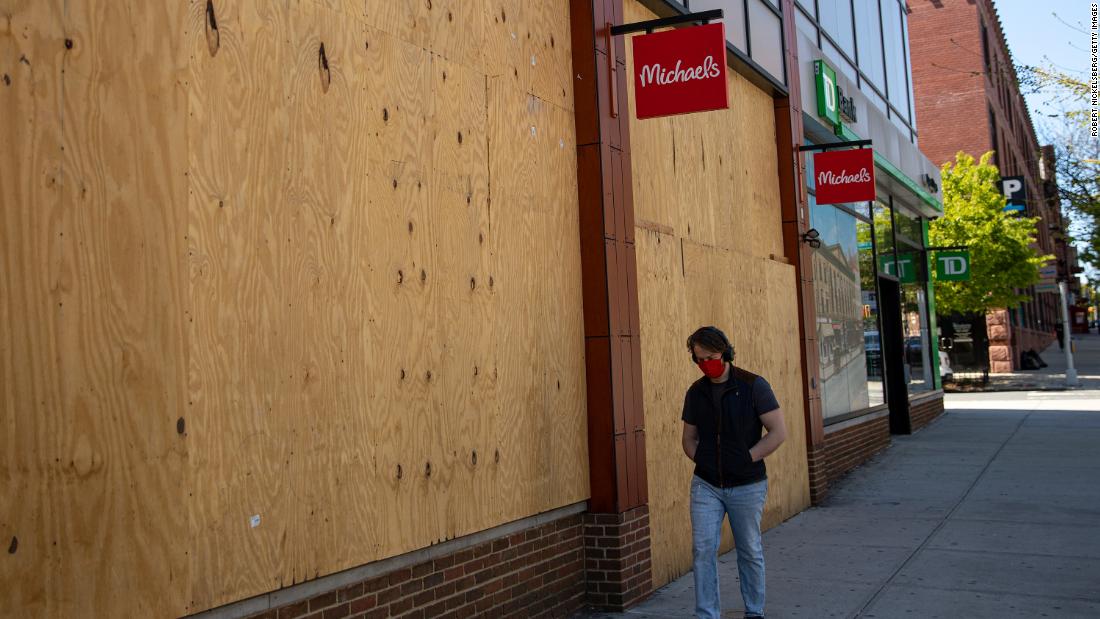 New York (CNN Business)The US economy contracted for the first time in nearly six years between January and March, as the coronavirus crisis put the world in a choke hold.

It was the first contraction of the US economy since the first quarter of 2014, and the worst drop since the fourth quarter of 2008, the height of the financial crisis.
Investments and consumer spending, which are the largest contributors to GDP, both fell sharply. Consumer spending declined at a 7.6% annualized rate, as people were ordered to stay at home. Last quarter marked the deepest decline in US consumer spending since the second quarter of 1980.
Much of America’s GDP decline was driven by lower-than-usual healthcare spending, as people delayed elective procedures.
The awful first-quarter report was alarming, considering the US economy was humming along in January and February until it came to a screeching halt in mid-March, when businesses shut and stay-at-home orders were put in place across the country. That was enough to offset the economic activity in January and February. The decline was worse than economists had predicted: The Refinitiv consensus forecast was -4%.
The BEA cautioned that “the full economic effects of the Covid-19 pandemic cannot be quantified in the GDP estimate” because the impact of the outbreak cannot be stripped out of that data.
Ahead of the report, economists warned that this was only an advance reading of GDP growth that could be revised down as more data from the quarter trickles in. The first revision will be reported on May 28.
Even so, the message is clear: six years of straight quarterly growth are over and America is almost certain in a deep recession.
“The economy has fallen off the cliff and broken its neck with the only thing consumers are buying are nondurable goods like food and beverages for ‘off-premises consumption,'” said MUFG chief financial economist Chris Rupkey.

How bad is the downturn?

Historically, recessions have been manufacturing-led. But the situation is very different this time around as the economy faces both a demand shock from consumers staying home and a supply shock from businesses shutting down.
On top of that, 26.5 million Americans have filed for initial unemployment benefits since mid-March following large-scale layoffs and furloughs. This will drag down incomes and could lead people to save their money rather than spend it.
“The way we’ve been thinking about this based on evidence from around the world is that each week of lockdown probably knocked off between 0.5 and 1 percentage points off annual growth,” said Michael Grady, chief economist at Aviva Investors.
This doesn’t bode well for the current quarter. Even optimistic views of lockdowns lifting within the next couple of weeks would mean around half the quarter was spent in lockdown, Grady said.
Some projections suggest the economy will contract at an annualized rate of as much as 40%, which would be the worst since the BEA began tracking quarterly GDP growth in 1947.
Some states are beginning to reopen, but experts believe it will be some time until activity levels are back to what they were before the outbreak.
Another question on economists’ minds is how consumers will react when the economy opens back up. After weeks of social distancing, people might be less inclined to engage in the economic activity they participated in before, and restaurants and movie theaters could remain empty for a long time even after the lockdown lifts.
“Unfortunately, we doubt that the US will experience a V-shaped recovery,” said ING chief international economist James Knightley. A “V-shaped” recovery is a speedy economic bounce-back from a sharp downturn.
With the legacy of the coronavirus crisis lingering and the potential for long-term structural changes in the economy has consumer adapt to a new normal, the economy won’t bounce back until late 2022, according to Knightley.

An IPO? In this economy?