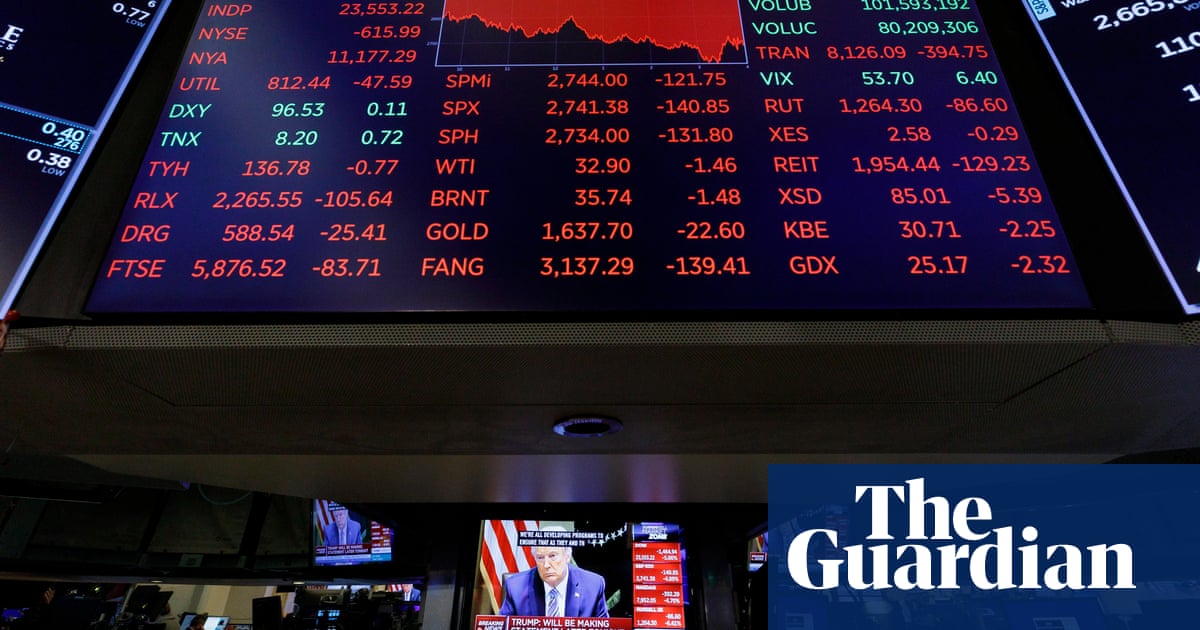 Donald Trump has banned travel to the US from most of Europe apart from the UK and Ireland for 30 days in an attempt to limit the spread of the coronavirus.

The move failed to stem heavy losses on financial markets and prompted one top economist to warn that a global recession was now highly probable.

In a sombre primetime address from the Oval Office on Wednesday evening, the US president boasted that the travel ban and series of other measures designed to cushion the economic blow of the outbreak amounted to the most aggressive and comprehensive effort to confront a foreign virus in history.

But Asian stock markets and Wall Street futures trading plunged deep into the red even as Trump laid out his plans, with investors betting that the $250bn package would not be enough to reverse the creeping shutdown of the worlds largest economy.

The US suspension will not apply to the United Kingdom and Ireland, and does not apply to American citizens, Trump said, as he attempted to blame the European Union for seeding hotspots in America. Confusion following Trumps address later forced officials to clarify that cargo, as well as non-Schengen countries in Europe, would also be exempt from the ban.

Observers said the speech, in which Trump gave the sense of resisting a foreign invasion, struck a strange tone. David Litt, who wrote speeches for Barack Obama, said: As a former presidential speechwriter, my careful rhetorical analysis is that hes gonna get us all killed.

Elsewhere, Italy saw its restrictions on daily life increase after the government ordered the closure of all shops apart from pharmacies and grocery stores and other essential stores. The whole country of 60 million people was placed into lockdown on Tuesday and is the second-worst affected nation with more than 12,000 cases.

The outbreak also claimed its most high-profile cases so far when Hollywood superstar Tom Hanks announced that he and wife, Rita Wilson, have tested positive for the coronavirus. The pair are in Australia where the 63-year-old actor is making a film about Elvis directed by Baz Luhrmann.

In other developments, the NBA basketball league was suspended indefinitely after a Utah Jazz player tested positive, and New York and Chicago cancelled their St Patricks day parades next week, the first time it has happened in more than 250 years.

Global infections have now risen above 126,000 and there have been 4,600 deaths caused by what the World Health Organization has now officially declared a pandemic. China still accounts for the majority of victims but official figures from the country on Thursday said there had been just 15 new infections in the past 24 hours.

The number of US cases has risen to more than 1,300, with the sharp increase in recent days one of the factors forcing Trump to respond more forcefully to the outbreak after consistently trying to play down the threat.

But he still attempted to deflect blame, calling it a foreign virus and saying that there had been dramatically fewer cases in the US than in Europe.

The European Union failed to take the same precautions and restrict travel from China and other hotspots. As a result, a large number of new clusters in the United States were seeded by travellers from Europe, he said. After consulting with our top government health professionals, I have decided to take several strong but necessary actions to protect the health and wellbeing of all Americans.

The US economic measures revealed by Trump include financial relief for workers who are ill, quarantined or caring for others due to the illness, Trump said, adding that the US treasury would defer tax payments without interest or penalties for certain businesses and individuals. The financial system would be bolstered by an extra $200bn in liquidity, he said, and small businesses would be given access to more capital and liquidity.

But Mohamed El-Erian, the highly respected chief economist of insurer Allianz, said such measures would not do enough to prevent the shutdown of economies across the world, which was now gripped by the economics of fear.

The advanced economies are now likely to feel the full force of economic sudden stops that destroy both supply and demand at the same time, he said. The collapse in economic activity risks being amplified by the economics of fear, uncertainty and adverse economic-financial feedback loops.

I believe there is a high probability of global recession.

Tom Hanks revelation that he had become infected was also seen as significant factor, given the spread of the contagion to such a well-known person.

His gloomy analysis was reflected in financial markets in Asia Pacific, which plummeted into full selling mode during and after Trumps address. The ASX200 in Sydney was down 7.2%, in Tokyo the Nikkei was off 5.4% and Hong Kong fell 4.3%.

Shares in airlines were especially badly hit. Australias Qantas fell 11%, Singapore Airlines was down 4%, as was Hong Kongs Cathay Pacific Brent crude oil, the international benchmark, was badly affected by new of the travel ban, falling 5.3% to $33.88.

The price action pointed to more selling in Europe and the US when markets open on Thursday. The Dow Jones industrial average entered bear market territory on Wednesday defined by a 20% fall from its most recent high and futures trading suggested it would lose another 4.4% on Thursday. The FTSE100 is set to shed 5.8% in London.

The travel ban from Europe has definitely taken everyone by surprise, said Khoon Goh, head of Asia Research at ANZ in Singapore. Already we know the economic impact is significant, and with this additional measure on top its just going to multiply the impact across businesses. This is something that markets had not factored in … its a huge near-term economic cost.